Had to do a little traveling for work this past week and found myself in Jersey City. Not the first time I’ve been there but luckily I got to try quite a few places I’ve never been before.

The first night our Partner took us to dinner at Vu at the Hyatt Regency. A five-course meal in a private room with a view overlooking the Manhattan skyline was honestly a great way to cap off a day of both travel and work.

One of the more notable courses was the Maryland-Style Crab Cake which was prepared very well.

For the main course I chose the fish, which was a Grilled Pike with a Quinoa Salad and Roasted Baby Heirloom Tomatoes. Pike is one of those fish I’ve just never gotten a chance to try before for one reason or another and I really enjoyed the flavor (likely enhanced by the excellent way it was prepared).

The next night I wanted to strike out and see a little more of what Jersey City had to offer. Fortunately my sister lives twenty minutes away so she served as my guide for the evening.

We started out with a couple of beers at Zeppelin Hall, an authentic German biergarten. Draft selection didn’t quite compare to my local Tampa favorite, Mr. Dunderbak’s, but it got the job done. That’s a Hoeggarden and a Hacker Pschorr Oktoberfest.

After drinks we headed to an upscale pizza and pasta restaurant called Porta Pizza.

It’s important to note that Murphy’s Law of Rare Beers is not without a sense of irony; after trying Victory’s Kirsch Cherry Gose for the first time a few weeks ago, I’ve been searching Tampa high and low for a taphouse that has it on draft or a liquor store that sells it in bottle but to no avail. Funny that I find it again in a pizzeria in Jersey City of all places.

We ordered the olives to snack on while we had our drinks which were very good. They included among others, Castelvetrano olives, which is a particular variety that isn’t easy to find in Tampa.

For dinner we split a Margherita Pizza and an order of Ravioli. Let’s be honest here; we could have taken the PATH into NYC and found a decent slice of pizza in ninety seconds by walking in any direction. But as with the biergarten, the pizza at Porta got the job done. I was slightly more impressed by the ravioli which was served with a really savory cream sauce, somewhat reminiscent of an Alfredo but with a distinct smokey flavor. 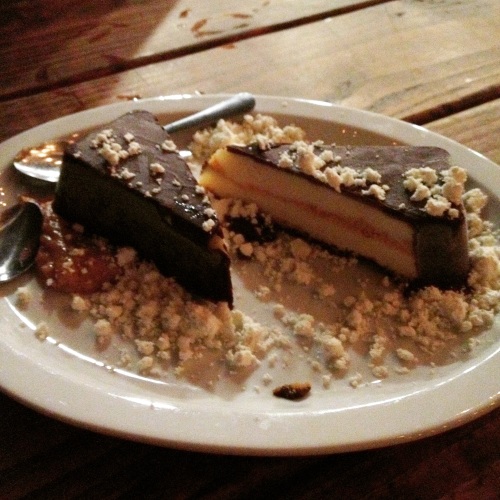 Our server kept raving about a new desert they had just started serving so we gave it a shot and it wound up being the Piece de Resistance. The Dark Chocolate Covered Extra Virgin Olive Oil Gelato Bar with a Brown Butter Crumb was amazing. I’m not much of a desert guy but I do like some ice cream every now and then and this stuff was off the chain. 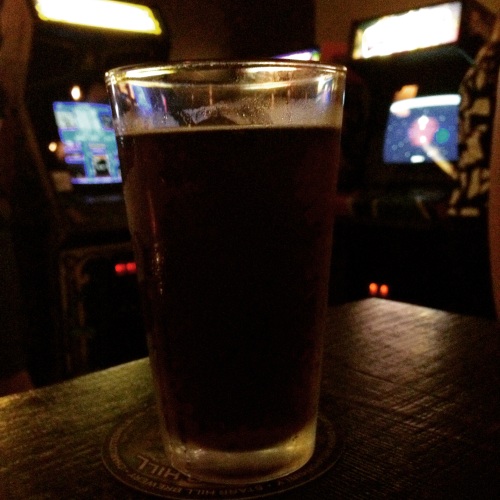 We ended the evening with a couple more drinks at a really unique little joint called Barcade. As the name implies it purveyed an impressive selection of both craft beers and vintage arcade games. Every game I remember from arcades in my childhood was there; Donkey Kong, Ms. Pac Man, Mr. Do, Asteroids and many others. If you played it when you were a kid in the 80’s it was there and its apparent someone put a LOT of love into locating and/or restoring functioning cabinets of all these games. The draft selection was impressive and I went with Rogue’s Hazelnut Brown Ale which I had never tried before but really enjoyed.

While Jersey City may not be anyone’s first choice when it comes to food, especially with all the epicurean options of New York City right across the river, there were still some gems hidden away and I’m glad we took the time to explore a few.

Been to Jersey City? Have any favorite locations? Leave a message in the comments section below!