Epcot’s Holidays Around the World 2017

It’s getting to the point where there is no part of the year that Epcot isn’t hosting some kind of festival that is based around food or at least has some form of culinary component. Winter now sees the Festival of the Arts, Spring has the Flower & Garden Festival, The International Food and Wine Festival is their big one in the Fall and now they have introduced the Festival of the Holidays.

There are some who feel that all these festivals are a bit of overkill but I’m always in favor of more. Every festival is different and explores varied culinary themes. The Festival of the Holidays saw 11 Holiday Kitchens focused on presenting traditional seasonal fare from the participating countries. 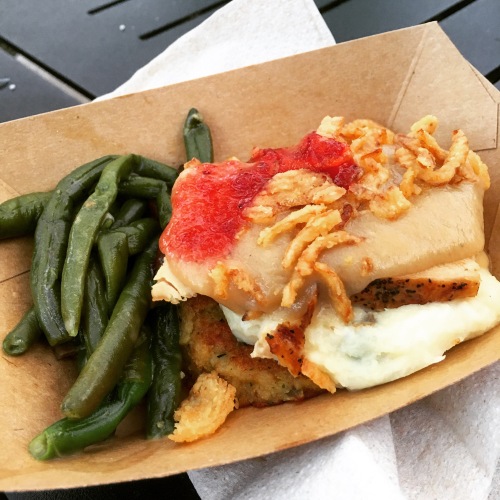 For beverages they were slinging this incredible Eggnog White Porter from Shipyard Brewing Company. I don’t know where they located this because I’ve yet to see it anywhere else, but if you love beer and you love eggnog, this is a perfect holiday brew.

Also in America is BrewHub’s Pumpkin Spice Dunkelweiss. And since it was from the the Drum and Fife Tavern rather than a holiday kitchen this was available in a full size draft. 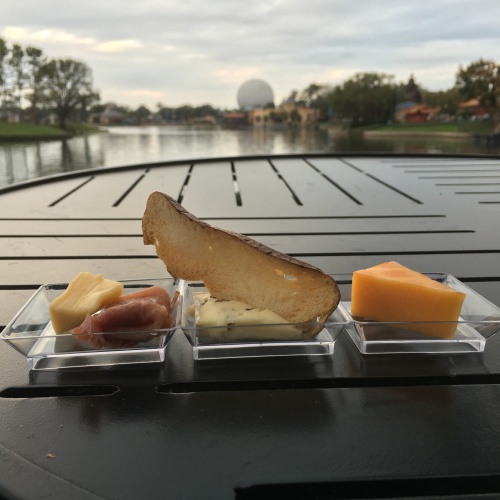 In Germany, from the Bavarian Holiday Kitchen a German Cheese Plate featuring a Butterkase w/Ham, Mushroom Brie w/Pretzel Crostini and a Tillamook Cheddar. 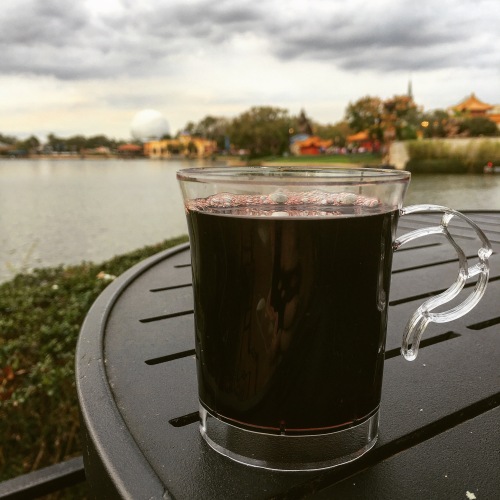 Also from the Bavarian Kitchen, Spiced Gluhwien. It was a somewhat chilly day when we were there and this was great for sipping while relaxing by the waterfront.

And again from the Bavarian Kitchen, the German Cheese Fondue in a Sourdough Bread Bowl with Steamed Baby Vegetables and Roasted Potatoes. This may have been my favorite dish from the event and the veggies were locally sourced to boot. 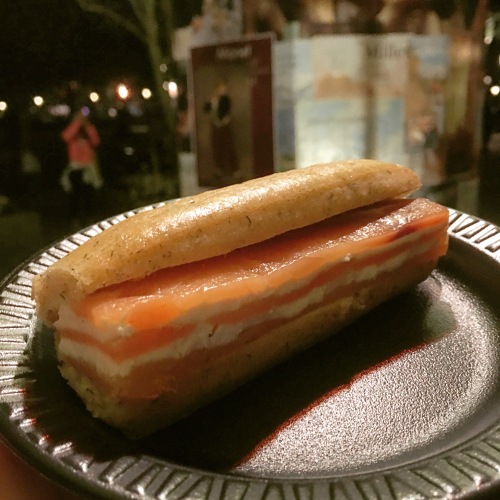 From the Alsace Holiday Kitchen in France was the Napoleon de Saumon Fume Brioche, a Smoked Salmon Napoleon on a Dill Brioche Roll.

Another from the Alsace Kitchen, the Petit Reveillon de Noel, a Turkey Breast stuffed with Mushrooms and Chestnuts with a Sweet Potato Puree. The Turkey Junkie in me loved this one.

From the Tarabaki Holiday Kitchen in Morocco was the Confit of Cheramoula Chicken Drum with Cinnamon Granny Smith Apples, Toasted Almonds, Brussels Sprouts and a Pinor Noir Syrup. This was a very unique dish and somehow the cinnamon apples and almonds made it feel very much like a holiday meal.

And of course since it’s Disney the decorations and events are always done well.

Little touches like adding this “snow” man to the agricultural exhibit the Land make the ride festive without hitting you over the head with it.

One of the more interesting things they do is each country’s interpretation of Santa Claus. In France park-goers could visit with Pere Noel.

This Christmas tree in the American Adventure was huge…

…but paled in comparison to the World Tree in the center of the park.

Disney does the holidays well. Epcot does these festivals well.  The big bonus is that since Epcot is the most “adult” of all the parks you get to enjoy things that aren’t geared around kids quite so much. When you put all of that together it makes for an excellent place to enjoy this time of year and it’s easily worth it.

Visited Epcot during the Festival of the Holidays? Leave a  message in the comments section!

Once again it was a hell of a busy season. I had made a conscious decision to get out and experience as many holiday events as possible and I made sure to take lots of photos.

Putting up the Christmas tree at the beginning of the season saw the addition of a new beer-themed ornament and I’m really starting to appreciate these things.

After Christmas Tree decorating, we hit up Menchie’s to try their new holiday flavors. In the bowl is a swirl of Egg Nog and Gingerbread Cookie and it made me irritated to know I’ll clamor for this stuff for the next 11 months. 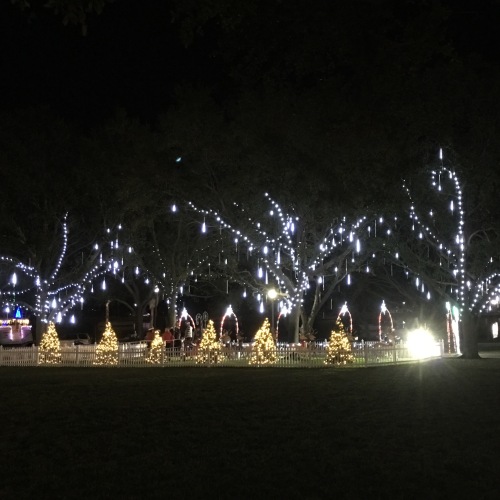 One evening we decided to catch the Christmas Light Display in North Straub Park. While the photo doesn’t do it justice, the City of St. Pete did a good job with it this year. And it afforded us the chance to grab dinner at 400 Beach Seafood & Taphouse where we ate outside and enjoyed a great park-side view as pictured above. 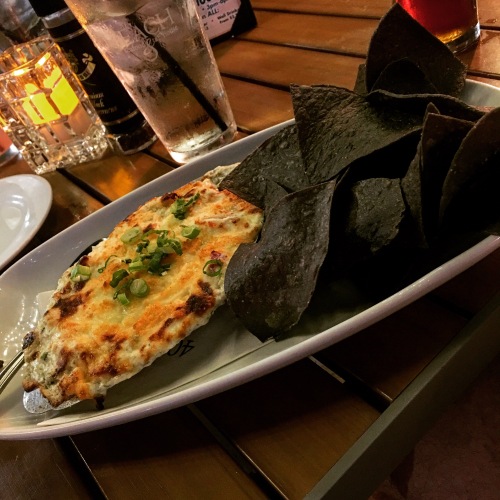 From 400 Beach Seafood & Taphouse, the Manchego Artichoke Fondue. I never thought of Manchego as a melty-cheese but they somehow altered the laws of physics to make it so. 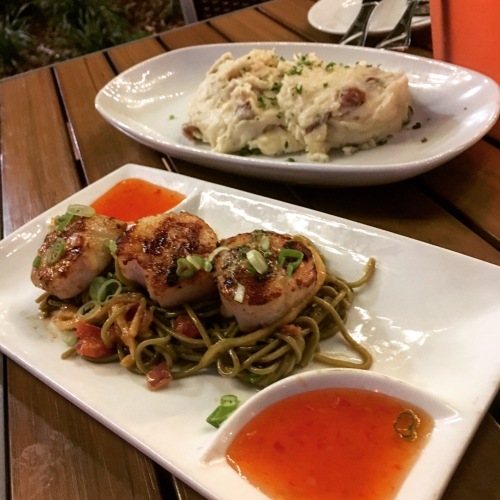 Also from 400 Beach, Asian Seared Scallops on a Soba Noodle Salad with a Ginger Plum Sauce.

And a Rod Bender Red Ale from 3 Daughters Brewing Company hit the spot while we enjoyed the lights.

The night before Christmas Eve, we also managed to take in the Holiday Boat Parade from the Sail Pavilion in Downtown Tampa. I’ve never attended before, but dockside drinks and a really impressive display from the participants made this an event I’ll want to attend for years to come. 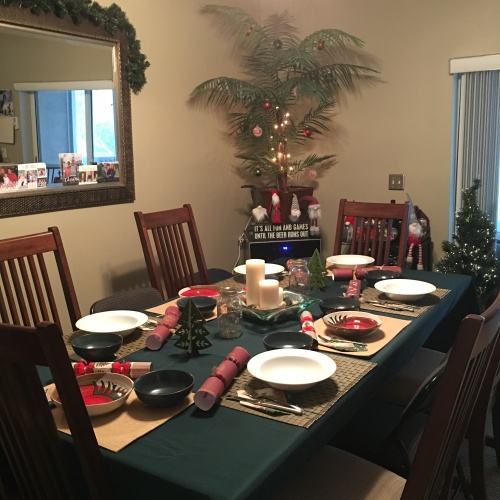 Entertained about eight guests for Christmas Eve Dinner this year which was a perfect size for my table. The Christmas Crackers are becoming a fun little holiday tradition. Christmas Eve Dinner saw my first attempt in years to make Stuffed Mussels. These take a long time to prep which I usually can’t waste if I’m working during the day on Christmas Eve. But since it fell on a Sunday this year I took a shot. The entire batch was gone so it’s safe to say my guests loved them.

Christmas Day was spent at my at my friends’ house in Westchase and included lots of homemade Limoncello. There were literally bottles of this stuff everywhere and each sip was worth the calories. 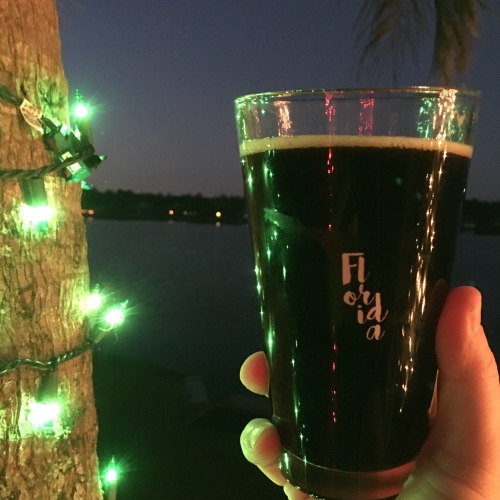 This is the kind of thing that makes you really appreciate Christmas in Florida; a lakeside beer at sunset on Christmas Night.

And speaking of beer and Florida, Abita Brewing’s 2017 Christmas Ale was a really good brew this year and the Santa/Gator bottle art just seemed far too appropriate not to showcase.

The Christmas Toast. Can’t say enough about how much I love scenes like this.

I’m a Turkey Junkie and my friends did not disappoint. Christmas Turkey Dinner with Gruyere Scalloped Potatoes, Stuffing and Pear & Bleu Cheese Salad. Those potatoes were the highlight.

The day after Christmas saw a Boxing Day hike with the canine at Flatwoods Park as my attempt to burn off some of the holiday calories.

The hike was followed by a nice lobster roll at Prime Bar which kind of negated the calorie-burning but hey, I’m on vacation.

It’s not the holidays without a care package full of homemade baked goods from Mom which also arrived the day after Christmas. Spritz Cookies, Candied Pecans, Gingerbread Cookies, White Trash and Fool’s Toffee.

Of course no holiday wrap-up is complete without the cataloging of some beer-themed loot and my friends are excellent gift-givers. 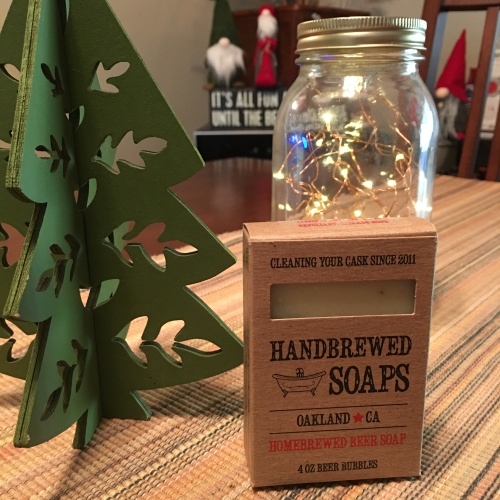 Homebrewed Beer Soap made with IPA! This isn’t going to be one of those fancy soaps you only put out for guests. I’m using this bad-boy. 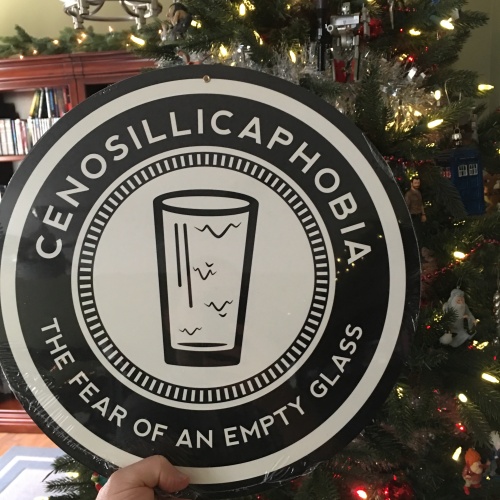 Cenoscillicaphobia metal placard . It’s a fear I can relate to so I found this amusing.

Can’t go wrong with new glassware. I love my state. I love beer. These glasses scratch both itches.

One of my friends visited California in December and was cool enough to pick me up a stainless steel pint glass from Black Plague Brewing.

I’m not a fan of Belgian beers but some of the holiday ones are able to mask the Belgian yeast funk with the correct blend of spices. Barrel of Monks Father Christmas Holiday Ale is something I wanted to try but couldn’t get my hands on. Fortunately my friends saved the day with this bottle.

By the time New Year’s Eve rolled around I was hovering on the brink of exhaustion so I had no complaints about a relaxing night with some Tuna Croquettes for dinner and a few good holiday brews to close out the season. 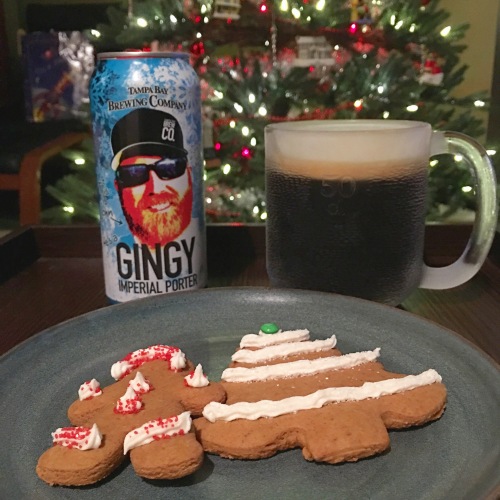 Tampa Bay Brewing Company’s Gingy Imperial Gingerbread Porter may have been my favorite seasonal beer this year. And it went great with the aforementioned cookies as a way to ring in the new year.

Last but not least I leave you with the traditional but rare photo of the Tampa Food Dude in a funny Christmas hat. Because nothing says “Christmas Lunatic” like a guy in a shiny red fedora. Hope everyone enjoyed the holidays as much as I did this year and I wish you all a fond Merry Christmas and a Happy New Beer!

And remember… Beer is freedom… and the food abides…