Game of Thrones and a Coppertail “Stash…” 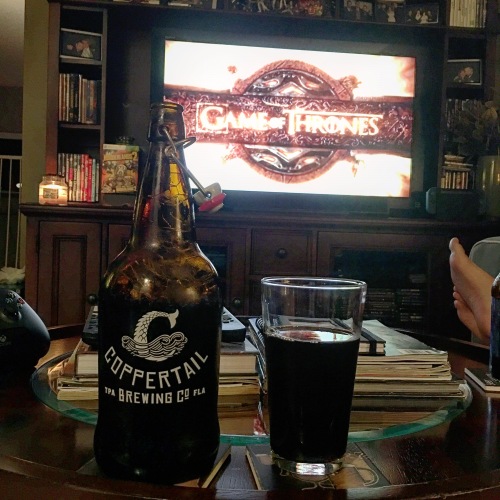 Yes it’s another Another Game of Thrones post so soon after the last, but it’s been a short season. In the glass is a Coppertail Brewing Co.’s “Stash” a Tropical Stout with Pistachio and Vanilla Bean.

This is a really unique brew with a very pleasing texture… and it tastes like drinking a big boozy bowl of pistachio ice cream. Which is a good thing.

Hope everyone enjoys the show!

I had very fond memories in the late 90’s of Hospitality Night every Sunday at the old Mangroves on Howard Avenue. Perhaps it was the desire to not tarnish those memories that caused me to avoid any other establishment that was built on that location but I unconsciously steered clear of that area for far longer than I should have. It wasn’t until recently, when a good friend’s birthday dinner was planned there, that I ventured into that spot upon which now resides, Cask Social Kitchen.

While the soul of the old Mangroves is gone, it’s been replaced with a similar contemporary feeling accented with lots of barrels and exposed light bulbs. It has a relatively small parking lot for such a big building so the complementary valet was greatly appreciated especially in an area like SoHo where parking is usually brutal. 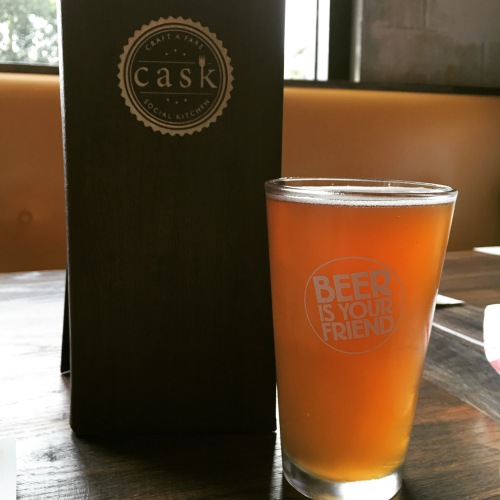 As if the name wasn’t any indication, Cask features wine and lots of signature whiskey-based (among other) cocktails, but I was impressed with the amount of local and craft beer they offered. Ordered the Spacegrass IPA from Angry Chair Brewing right down the road in Seminole Heights and it was a perfect starting brew.

They had a wide range of apps, some of which were rather unique. I went with the Buffalo Cauliflower and this dish was spectacular. I honestly couldn’t even tell I was eating cauliflower because it was breaded so well and had just the right amount of heat. I’m not quite sure why it was served with ranch dressing instead of bleu cheese and that’s the only thing I would change about the dish. 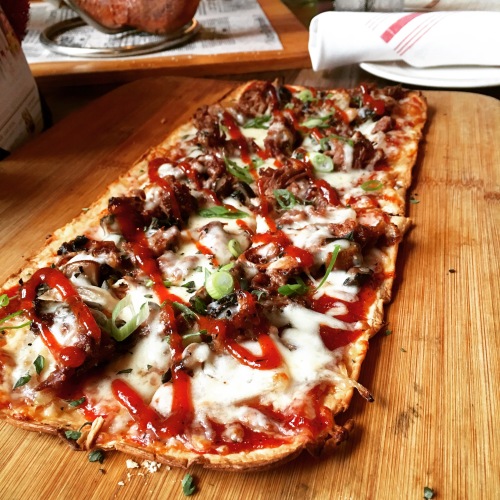 Some of my friends ordered the BBQ Short Rib Flatbread with Caramelized Onions, Fresh Mozzarella, Goat Cheese and Roasted Portabello Mushrooms. They could not stop raving about this and just looking at it made me sorry I don’t eat red meat.

By now you’ve probably noticed the “Social Kitchen” moniker tagged onto their name. Cask has their own take on “family style” serving that they call “social eating.” A good number of the menu items have two prices. One price is for a single serving and another is for a group serving intended to share.

You’ve no doubt read my thoughts on other places that try this concept and my disappointment when it doesn’t quite work out. To this day, I don’t understand how places like the Rooster and the Till can “encourage sharing” with such small portions.

But this is where Cask knocks it out of the park. A single serving is a full portion and a sharing portion is a serving and a half. This is the perfect amount of food and Cask nailed it; this spot-on structure truly encourages sharing. It also helped that the food was prepared extremely well and it had one of those across-the-board menus that has something for everyone, but we all took advantage of this and the passing around of plates felt like a bona-fide communal experience. 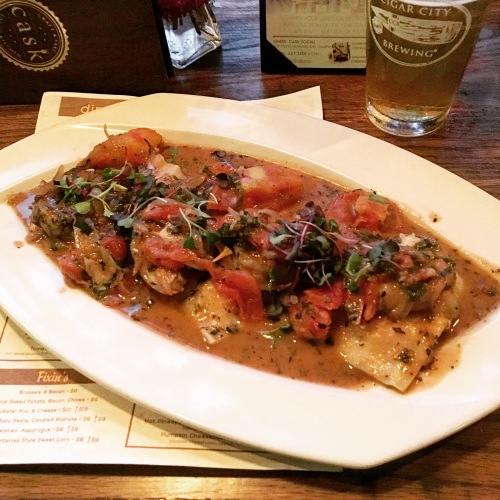 I went with the Rock Shrimp & Lobster Ravioli with Fire Roasted Plum Tomatoes and Sweet Basil. There was a ton of seafood jammed into this dish and the sauce was perfect.

One of my friends ordered the Citrus Scallops with Sauteed Spinach, Grilled Sweet Potato, Caramelized Grapefruit and a Citrus Brown Butter. The scallops were huge, the grapefruit was an interesting tropical take and the brown butter sauce was amazing.

Another member of our group ordered the Chicken & Waffles with Vanilla Cream, Orange Spiked Maple Syrup and Honey Butter. Right up there with Shrimp & Grits, Chicken & Waffles is another one of my favorite southern dishes and Cask did an amazing job with it. The orange maple syrup was a nice touch and added a little bit of Florida flair.

While they did have an extensive desert menu, since it was a birthday, we brought a cake and Cask had no problems with this.

The service was impeccable. Even though there were sixteen of us and we had only one server, he never flinched. He explained the serving/pricing structure in a clear way and didn’t hesitate when I asked him what current beer on tap he would recommend. Food came out on time and not a single order was messed up even though he didn’t write anything down.

I can’t think of a single negative thing to say about this establishment and I’d recommend Cask Social Kitchen to anyone especially if you’re in a larger group. It truly is a social experience, the way communal eating was meant to be. 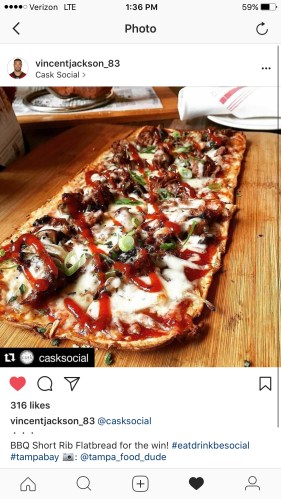 Oh, and if you’re there, make sure you post a pic of what you’re noshing on. Vincent Jackson just might regram your photo. Thanks for exposure #83!!!