Review – The Rooster & the Till

The Rooster and the Till can definitely be considered a dining experience. The ambiance is hip and upscale which contrasts greatly with the neighborhood it’s located in; this is a good thing because you don’t expect it when walking in the door. Décor is interesting with lots of hardwood, open lighting fixtures, large slate boards and kitschy table decorations like twinkle lights in mason jars. They’ve recently expanded, almost doubling in size since they first opened, which means more seats for more people.

We started with drinks and they had a good selection of local craft beers on draft. I had a 7th Sun Orange Dreamsicle which turned out to be an excellent brew.

Our server, who was very knowledgeable explained the menu (Modern American cuisine locally sourced from nearby farms and gardens) and their serving style (smaller plates and they encourage sharing.) More on this later. 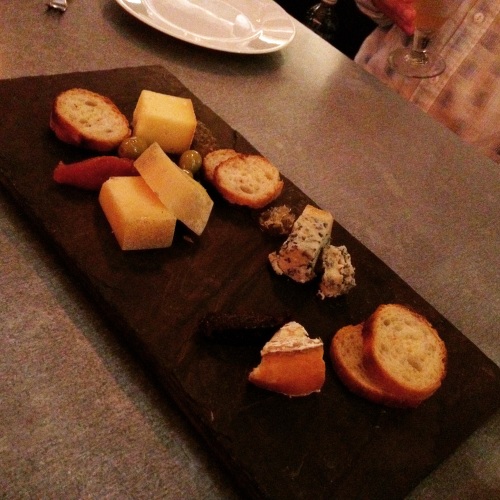 We started with an artisanal cheese slate which had some incredible flavors on it. A balanced tray, it included four styles, a sharp, a mild, a creamy and a hard. My favorite of the four was the Bay Bleu cheese, which was salty and sharp and paired very well with some fresh honeycomb. I also enjoyed the goat cheese which had a unique flavor. 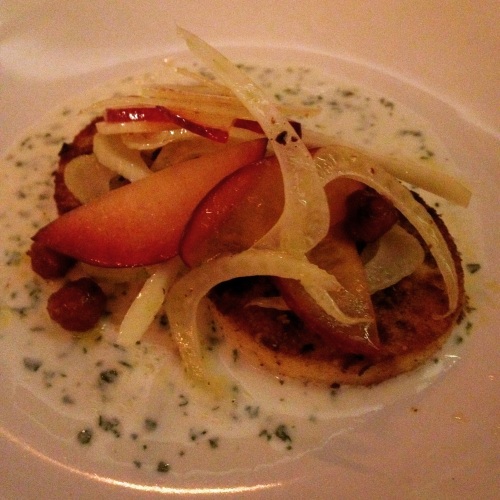 After that we ordered some “small plates.” We started with the Falafel Spiced Tofu with Salted Plum, Fennel, Chickpeas and Cilantro Yogurt. This was interesting and the salted plum was something very different.

We also tried the Crispy Cobia Collar with Nuoc Cham and Sesame Turnip Salad. I’ve only had cobia once or twice before but it was never prepared like this. Skin-on, bone-in isn’t something I’ve had much experience with, but if you were willing to work for the meat, it was worth it. The Nuoc Cham, a kind of Vietnamese sauce, was a perfect complement.

My friends also did a selection of raw oysters which they said were spot-on.

For our “slightly larger” plates we tried the Fazzoletti which is a giant piece of pasta a little larger than lasagna folded over itself and stuffed with onion pistou, sous vide tomatoes, parmesan cheese and olives. For a dish that skewed Italian, it hit the mark. 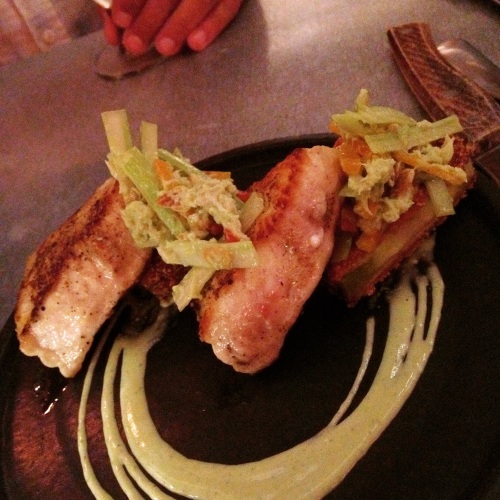 We also tried the Mako Shark Steak. First time ever having Mako Shark and I may very well have a new favorite fish. My guess is the preparation had a good deal to do with that.

My friends also tried the Pork Jowl with Corn Pudding and Pickled Turnips and they were very impressed.

On a whole, the food was excellent. Lots of new tastes and intriguing flavor combinations which I’d never experienced. That just added to the whole atmosphere of the evening.

You may have noticed I’ve been putting portion sizes in quotations. I’ve stated this before: portion sizes HAVE to match prices if I’m going to enjoy myself. Small portions are fine if the prices are small as well. This is not money thing, its full stomach thing. I live relatively far from the city proper so if I want to enjoy a few drinks I need a base in my stomach. That being said, the Rooster & the Till’s portions failed at this.

I knew this was going to be an issue when our server had to “explain their serving style because people sometimes don’t understand, get angry and leave.” With that kind of warning, how can you not raise an eyebrow?

First off, I don’t understand how they can encourage sharing with such small plates. Perhaps it makes more mathematical sense if you’re dining for two instead of three, but that would only make the price-per-head even larger.

We ordered a cheese tray, individually had two drinks, a small plate and a large plate and each walked out paying over 80 dollars. 240 greenbacks for three people would have been fine if I had left the restaurant full, but I did not. To make matters worse I couldn’t really enjoy a full drink at the next bar we went to afterwards for fear of not being able to drive home.

It’s somewhat of a shame because the food is worth trying and it may prevent me from going back unless I don’t plan on enjoying a beverage at all that evening.

Like anywhere else in Seminole Heights, the parking at the Rooster & the Till is atrocious. It’s a problem with most of the businesses in the area because there are residential properties right behind everything. I drove around for nearly 20 minutes trying to find a spot I wouldn’t get towed out of and managed to stumble upon a couple leaving a spot in an adjacent lot. Had I not made that, who knows how much longer I would have had to circle.

This is something Seminole Heights as a whole needs to address and come up with a solution for (I’ve attempted to go to the Independent on three separate occasions and all were a no-go because I could not find anywhere to park and I’m not walking half a mile on N. Florida Ave). As Seminole Heights expands, it’s only going to get worse.

Regardless of the few things I took issue with, I will still say the Rooster & the Till is worth trying. The food alone is delicious and the atmosphere/presentation makes for a great dining experience. Just remember to go in with the mindset that it’s GOING to be pricey if you want to leave feeling full. And unless you get there early in the evening before all the parking is gone, bring your lucky rabbit’s foot; you’re going to need it.

Tried the Rooster & the Till? Leave a message in the comments section!

This entry was posted on October 4, 2015 by A.C. Noia. It was filed under Restaurants .