Let’s face it, there’s not really much of note in San Antonio, Florida, a small rural town far from the urban sprawl of Tampa Bay. So when my friends discovered this little known hideaway, I was very intrigued. I’d been looking forward to trying this place ever since they mentioned it and I finally got the chance last week.

The Local Public House and Provisions is exactly that… local. All beer and wine is brought in from local microbreweries and wineries and all food is locally sourced. As the farm-to-table movement grows, it’s a very positive thing to see it done well in almost every establishment it’s attempted in and the Local Public House can proudly add itself to that list.

Being that the location is so off the beaten path, it was surprising to find the inside as jazzed-up as it was. The architecture was an open ceiling plan with lots of wrought iron fixtures and soft lighting. A pretty talented band was playing a rocked-out version of a rather poppy Elton John song and the patrons suggested a good deal of people were willing to make long trips from more urban/suburban areas in order to experience the establishment.

In other words, this was my kind of place…

Starting with the beer, I ordered a flight, (the most unusual of which was Fox Meadery’s Pink Stuff, a pink lemonade mead). All of their beer comes from local breweries which rotate out on a constant basis. That night’s offerings included selections from Barley Mow, Coppertail, Cigar City, Big Storm and Motorworks. 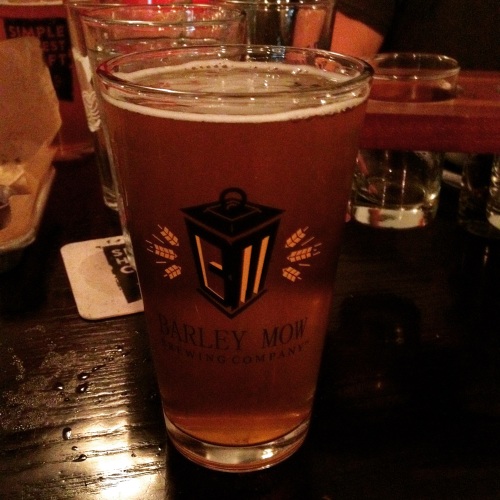 I liked the Barley Mow Americana Golden Ale the best of the bunch so I decided on a full glass. The Americana was a well-balanced, grassy, hoppy ale with a very refreshing citrus note on the back-end. Great beer for a hot summer night.

Our server was up front and honest with us that the kitchen was backed up so the food might take a little bit longer and she brought us an order of boiled peanuts as a recompense. The last time I had boiled peanuts was at a baseball game when I was 14 and I didn’t remember them being that good but they did a great job of tiding us over.

The menu, while somewhat small (a good thing when they do each dish very well), was a mix of typical pub fare and classic southern dishes but each with their own little twist. Pulled Pork Sandwiches, Chicken Liver Po’Boys, Catfish & Chips and Chicken & Dumplings are some of the dishes that can be found on their menus which are clipped to the back of a cedar plank. 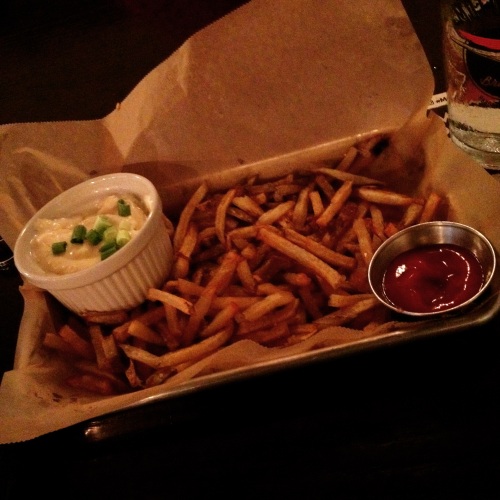 For an app I went with the Beer Cheese Fondue and Fries, an original take on the classic pub favorite, cheese fries. I list the fries second because while they were just shoestring potatoes (still homemade of course), the star of the plate is definitely the fondue. This is not your average cheese sauce out of a can. It was creamy with a nice little savory flavor at the end.

One of my friends got the Andouille Corn Dogs for their app and loved them. Another original take on a classic pub dish.

Although the Chicken and Dumplings were screaming my name, given the beer and the fries, I opted for something a little lighter. Went with the aptly named Big Salad, a gigantic salad with shrimp, gorgonzola, fresh fruit and a rather flavorful kumquat Vidalia dressing. Neighboring Dade City is the kumquat capital of the country and I appreciated the fact that they managed to work it into their menu.

In addition to the standard menu there are also weekly specials that are only served on certain days of the week like Shrimp & Grits on Thursdays and Chicken & Waffles on Mondays. Chicken & Waffles alone are enough to bring me back to the Local Public House again but the entire experience is guaranteed to do that on its own and I intend to follow through with a few more friends in tow.

A little out of the way? Yes. Worth the trip? Definitely. 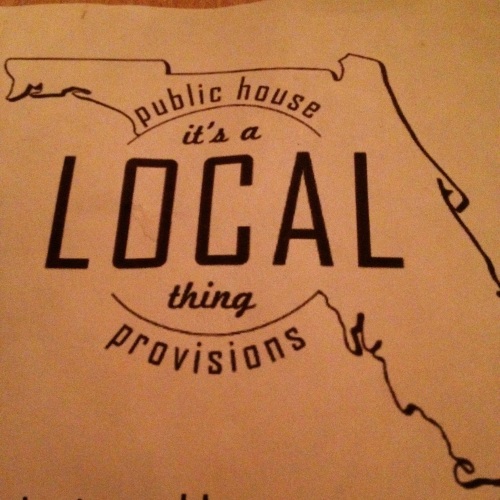 Tried the Local Public House? Leave a message in the comments section!

This entry was posted on August 15, 2015 by A.C. Noia. It was filed under Restaurants and was tagged with Barley Mow, Florida, Local Public House, Public House, San Antonio.