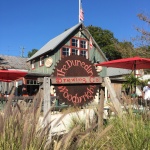 Nestled between Clearwater and Palm Harbor, this small waterfront community with a rich Scottish/Celtic heritage has become something of a mini-Mecca for breweries in the last couple of years. Like the St. Pete Brewery Corridor, zythophiles can easily spend an entire day walking around Downtown Dunedin sampling beers from a number of different brewers and that is exactly what we did. Not everyone in our crew made it to the end of the night, but those of us dedicated enough were treated to some unique new locations and some stellar new brews.

Woodwright Brewing Co. – This may have been my favorite of all the new locations. The building, a portion of which still actively operates as a woodworking company, is gorgeous and the smell of fresh cut wood is lingers in the air. There is a spacious courtyard with lots of long tables and a firepit and it’s surprisingly dog friendly. At one point I even noticed that there were more dogs than people.

Highlight – Among a host of great malty beers like Scotch and Irish Ales, a hearty porter and a solid Dunkel, I enjoyed their Woodwright Amber Ale the most. Slightly sweet with just a touch of citrus on the back end, this makes for an excellent example of what the brewers at Woodwright can do.

7venth Sun Brewery – The second oldest brewery in Dunedin, 7venth Sun is another local craft beer staple. Located in a strip center and with only a few tables outside and a few chairs inside, you don’t really come to 7venth Sun for the atmosphere, you come for the beer.

Highlight – A collaboration with Terrapin Brewing, Real Men Wear Skirts, a Scotch Ale with rye, was sweet and full-bodied with a nice rounded caramel backbone. That rye note is just subtle enough to accent the flavors. 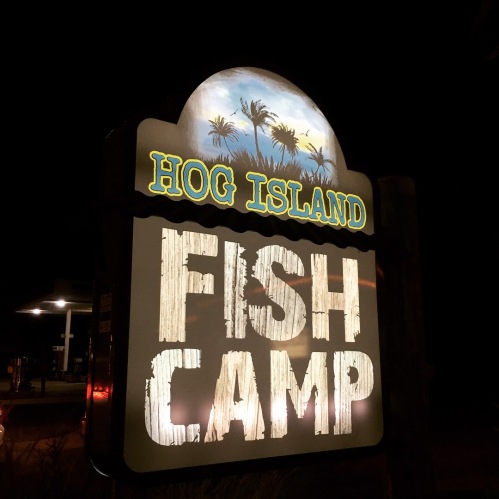 Halftime Eats – Hog Island Fish Camp – Around halfway though our day we decided we needed to stop and refuel. Being right on the water, there was no shortage of seafood restaurants in the immediate area, but on our way to the next brewery on our list we spotted Hog Island Fish Camp and decided to give it a shot.

Highlight – Our adventurousness paid off in spades and I was treated to this amazing Oyster Po’ Boy Sandwich. I’ve never had fried oysters this good before and this sandwich was quite large. This was a good thing as it gave me a solid base to continue beer sampling at the next locations. 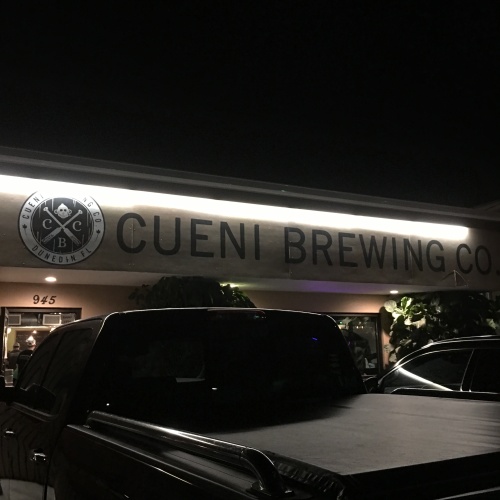 Cueni Brewing Co. – Speaking of the next location, across the street was Cueni Brewing Co. A relative newcomer to the Dunedin area, this place was small and their modest taps were still plying a lot of summer brews. What they did have was well crafted and I enjoyed what I got to sample.

Highlight – The Moove Over, I’m Milk Stout was a delightful experience for the senses. Cocoa on the nose, a creamy mouthfeel with just a slight fizziness to it and milk chocolate flavors on the tongue lent itself to what I found to be a surprising brew. Highly drinkable, it didn’t sit at the bottom of my stomach like a rock as most stouts tend to do. 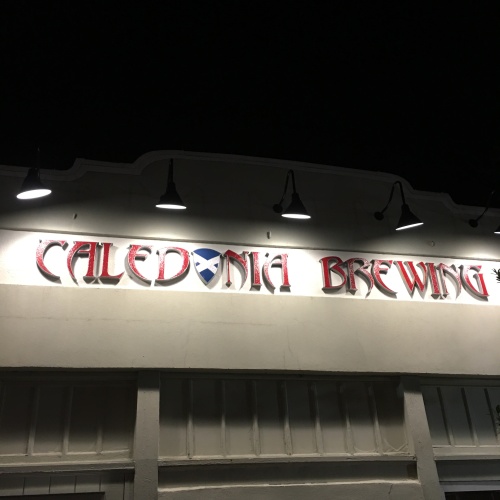 Caledonia Brewing – Our next stop was honestly the one I was the most excited for. Another newcomer to the Dunedin scene, Caledonia quite literally wears its Scottish heritage on its sleeve. This place operates like it’s been in business for 20 years. With blue lighting, lots of pub games and a jukebox, it was packed with clientele and felt like a Saturday night hangout. What impressed me the most was the beer list. Most new breweries start small with 4-6 core beers before they begin expanding their repertoire; however, Caledonia boasted close to 30 different styles and that is an impressive feat for a place that’s only been open for 7 months.

Highlight – When you’re in an area known for it’s Scottish roots and in a brewery named after what the Romans used to call Scotland, how can you not try the Scotch Ale before anything else? The Rat Arsed Scotch Ale was a legitimate offering with high caramel notes and a pleasant sweetness. This was a mellow brew and it was appreciated after the night started to wind down. 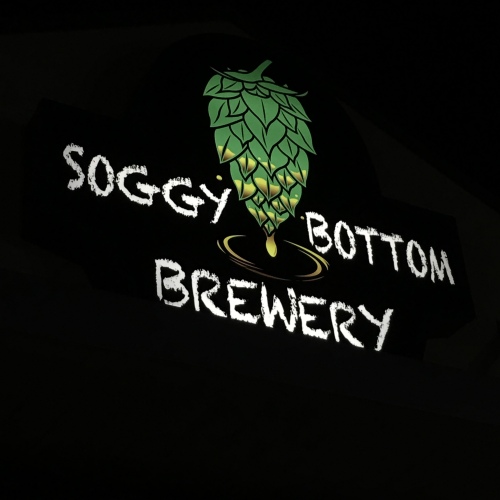 Soggy Bottom Brewery – Another new kid on the block as well as another location that had the feel of a Saturday night destination. With low ceilings, kitschy chairs made from old kegs and license plates and a mustachioed bartender in a vest and bow-tie, Soggy Bottom is a bit trendier than the other locations. That was reflected in their beer as there were some very unique offerings. 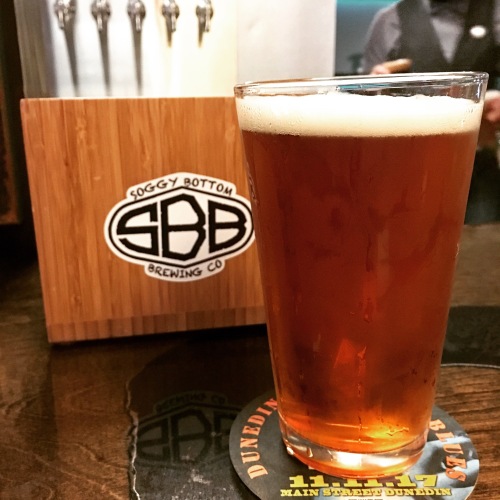 Highlight – While I wanted to try some of their more unique brews like the mint chocolate stout or blackberry wheat, they were still pouring an Oktoberfest. Given that we’re at the tail end of the Fall beer season I had to go with the Marzen.  As this will likely be my last Oktoberfest this year, I’m glad I went out with this one because it was worth it. 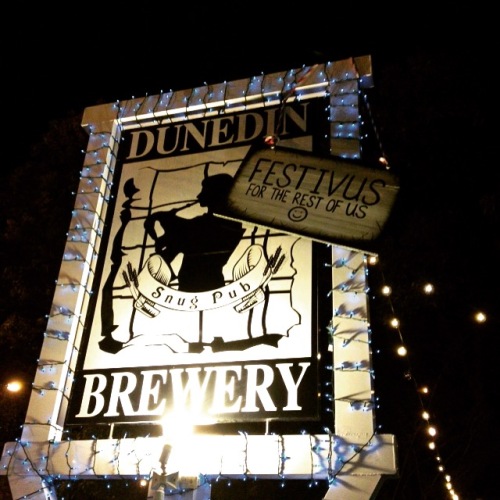 Dunedin Brewery – And of course none of the day’s adventures would have been possible without Dunedin Brewery.  As the Bay Area’s oldest microbrewery, DunBrew laid the ground work for twenty years and anchored Tampa as a craft beer destination. With old favorites always on the menu and new experimentations constantly coming down the pipe, you can never go wrong with coming to the area solely to visit this place.

Highlights – Went with a flight this time around and I sampled the Fear of Change Bavarian Amber, the Oktoberfest Marzen, the Al Grundy Red Lager and the Batten Down Berliner Weisse. The Fear of Change was easily my favorite of the bunch. Aged on Guatemalan cocoa nibs and cypress wood, this beer tasted simultaneously like Germany, South America and Florida all rolled into one fantastic brew.

If you’re a beer enthusiast visiting the Tampa Bay Area, you’re going to have to pick and choose where you sample as no one can possibly hit all 40+ local breweries in one go. But if you want to take on a large chunk at once, Dunedin’s density of craft beer-makers, all within walking distance of one another, is very attractive to that notion. Especially if you have an appreciation for Celtic heritage and darker, maltier brews.

Visited Dunedin and tried any of the local beers? Leave a message in the comments section!