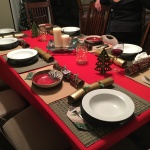 It’s always easy to tell whether or not I’m busy during the holidays by the frequency or infrequency in which I post. If this year’s lack of even a Thanksgiving update was any indication, it’s obviously been a whirlwind of a month and I wouldn’t have it any other way. Unfortunately that meant the little free time I had was spent shopping, testing new recipes and otherwise preparing the abode for holiday revelers.

Whenever I remain in Florida for the holidays I always make a giant pot of Linguine with White Clam Sauce and host a Christmas Eve dinner for anyone close to me who can make it. This year quite a few more people than usual chose to attend so I had a packed house. 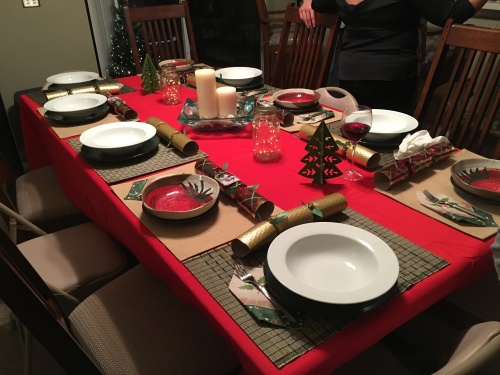 My Christmas Eve table, complete with English Crackers. Mismatched chairs and place settings meant there were more people than ever joining us this year and that couldn’t have made me happier. 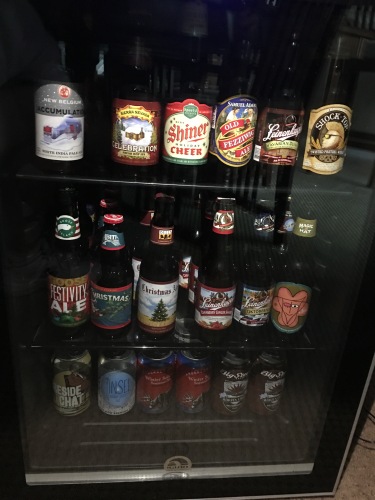 Of course my beer fridge was well stocked with plenty of holiday brews. Some of my favorites this year were the Barley Mow Tinsel, Anderson Valley’s Winter Solstice and Shiner’s Holiday Cheer. 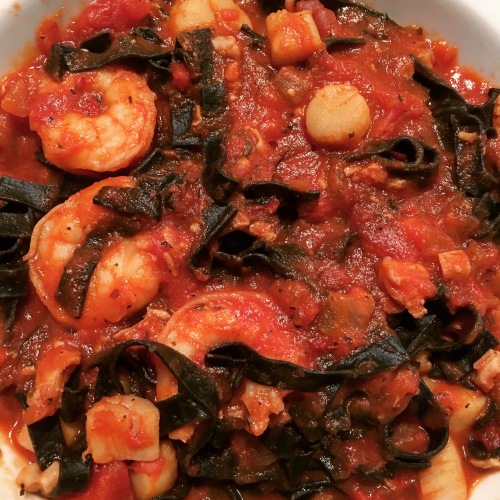 Because I had such a large group this year, instead of just the Linguine with Clams, I went full Seven Fishes. One of the dishes that came out very well was a Zuppa di Pesce, an Italian fisherman’s soup with clams, mussels, shrimp and scallops that I made in the crock pot. I added a little more oomph to the recipe by including some squid ink fettuccine which really upped the brine flavor. 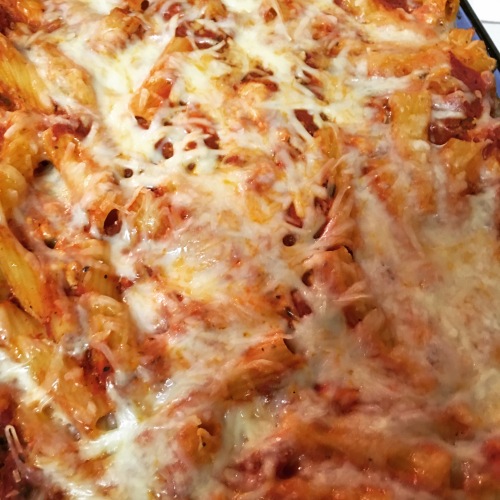 I don’t typically eat Baked Ziti as it’s too heavy but I tried my hand at cooking one of these for the non-fish eaters in attendance. There was only one small slice left at the end of the night so I have to assume it went over well. 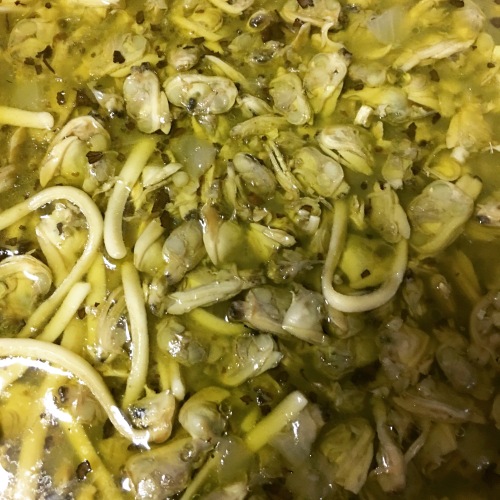 And of course no Christmas Eve is complete without the Linguine and White Clam Sauce. This is a shot of the bottom of the pot where there are more clams than pasta left. What most people don’t realize is that’s the best part. Eaten cold right out of the container on Christmas morning, there is no better breakfast. The overnight refrigeration seems to have the same effect that it does on Chinese Lo Mein (also better when eaten cold the next morning). 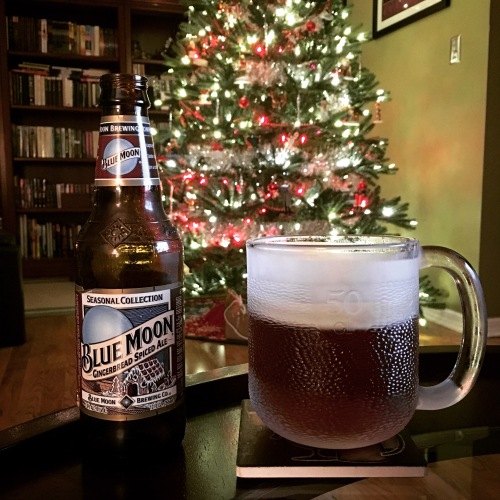 Once the pasta was eaten, the desert cleared away, the guests departed and the kitchen cleaned I got to sit and relax for the first time in almost a month. Took it as the right moment to crack open a bottle of Blue Moon’s Gingerbread Spiced Ale that I’ve been sitting on since last year. Time did not diminish it’s flavors and it went down well while I watched A Christmas Story about 3 times in a row. 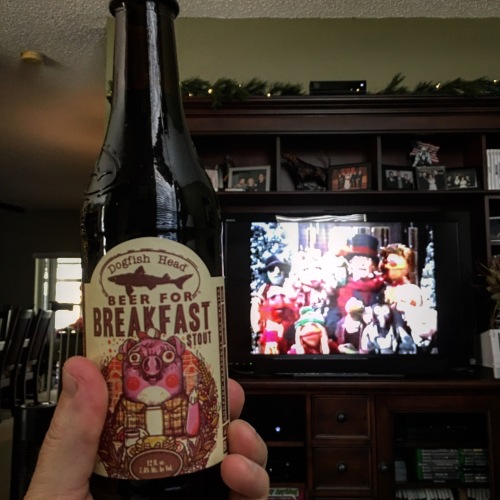 To keep myself young at heart, I have a rather juvenile morning ritual of cereal and cartoons on the weekend. Given that this particular weekend was Christmas however, I changed it up just a little bit by cracking a Dogfish Head Beer for Breakfast Stout and tossed on the John Denver & the Muppets Christmas special from 1979. Yes, I realize a late night beer on Christmas Eve and an early morning beer on Christmas Day is a little overkill, but it’s the holidays and I worked hard this year so I cut myself some slack dammit. 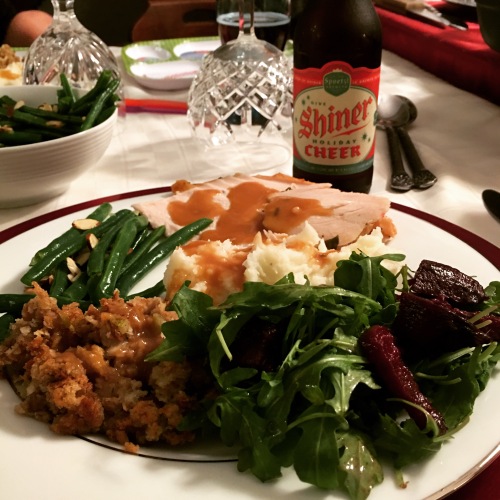 Just like Ralphie’s Dad, I’m a Turkey junkie so Christmas Dinner at my very good friends’ house in Riverview was much appreciated. Turkey, mashed taters, stuffing, green beans and a beet salad. After Christmas Eve’s very heavy pasta and oil based fare I was ecstatic to have some veggies along with it. The aforementioned Shiner Holiday Cheer went perfectly with this meal. 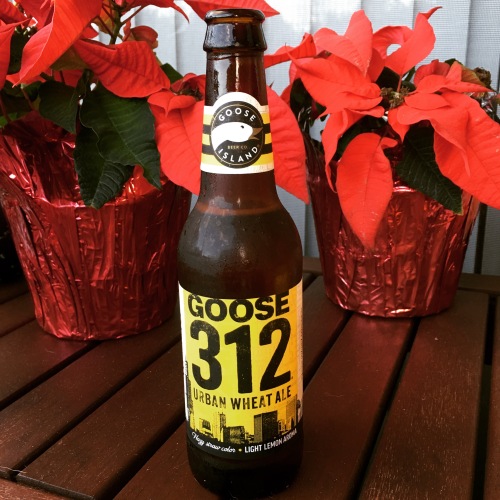 While it was no where near as hot or humid as it was last year, temps in the mid 80’s during the day meant it was rather temperate so I took a break from my heavy winter brews in favor of a refreshing Goose Island 312 Urban Wheat and it scratched the itch until the sun went down and things cooled off.

Of course we have to talk about the holiday loot. I have some great gift-givers in my circle and among some really awesome items, there were a few badass booze-themed ones that deserve mention. 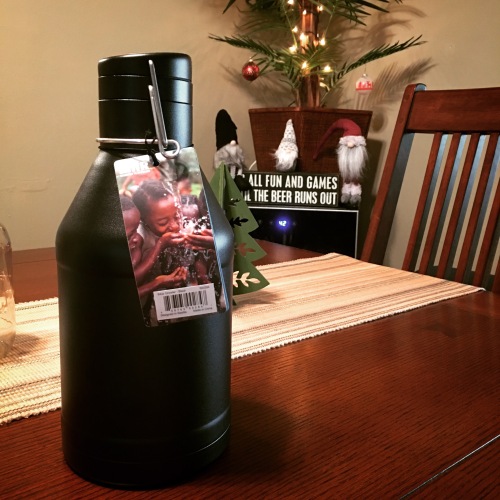 This is a 64 oz. Miir Growler. The proceeds of one of these growlers gives clean water to one person in a developing country for a year. Given the spirit of the holidays this was something I really appreciated. 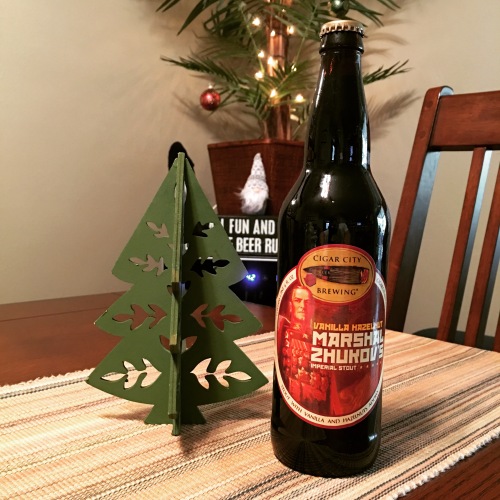 I’ve had my eye on this one in my Instagram feed for quite some time now and just haven’t gotten a chance to make it down to Cigar City to pick up a bottle. Fortunately my friend had his finger on the pulse and showed up with a bomber of Marshal Zhukov’s Imperial Russian Stout with Vanilla and Hazelnut. I think this badboy will be a New Year’s Eve brew. 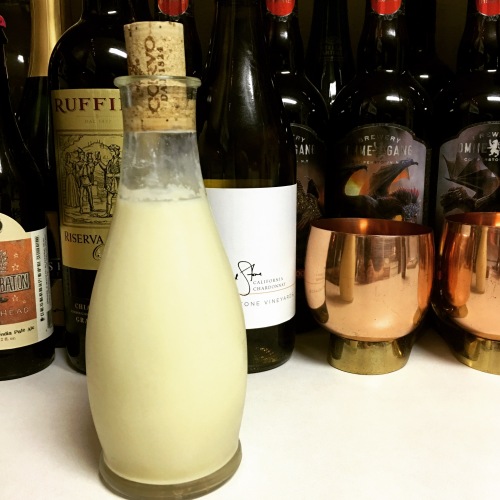 This same friend is also the one who makes his own limoncello which is one of my favorite after dinner cordials. This stuff does not last long in my house and I will be clamoring for another bottle by the spring. 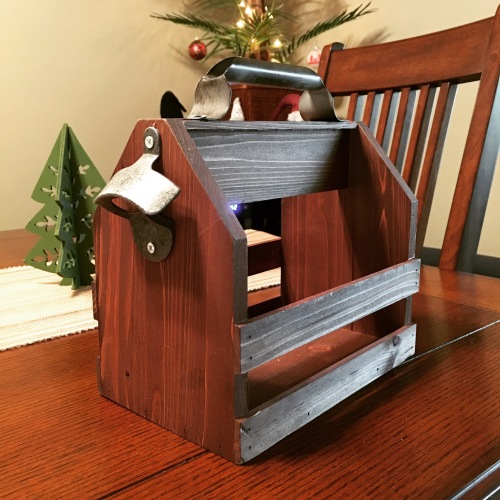 It’s obvious that the majority of my friends are fellow zythophiles, so when I go to parties, dinners and other gatherings, I’m always bringing new beers with me for people to try. That’s why this bottle caddy, complete with opener, was a perfect gift. Tried it out yesterday and the best part is that it doesn’t tip over in car the way a regular cardboard six-pack does. 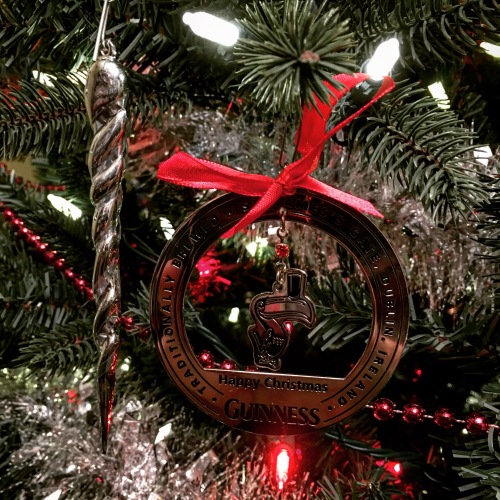 My Christmas Tree is a mismatched conglomeration of vintage ornaments from my youth, geeky fare like the Walking Dead, Star Wars and Marvel superheroes and booze-themed decorations. So when my friends gave me this Guinness ornament of course I already had the perfect place for it. 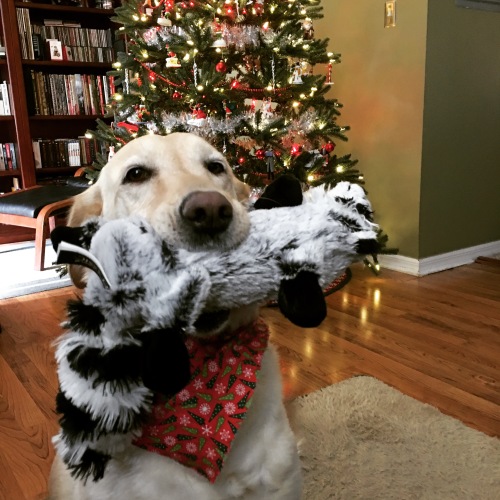 And in traditional fashion, here’s a photo of my dog Kira on Christmas morning, holiday bandanna on, new toy in mouth and while it can’t be seen here, tail wagging about a thousand times a minute. 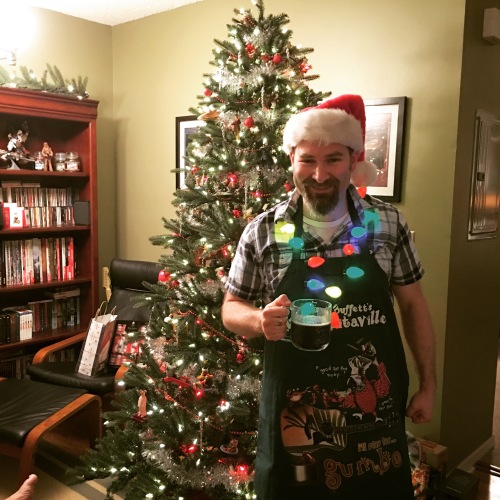 So in case no one has figured this out yet, I’m somewhat of a lunatic when it comes to Christmas. I suppose a little photographic evidence of that lunacy is in order. Consider it your Christmas gift from me.

I hope you’ve all been enjoying the holiday season as much as I have. We still have about a week before it officially comes to a close, so don’t forget to try a new dish or have a holiday beer with someone you haven’t caught up with yet. 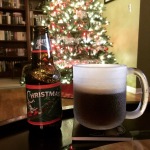 Kicking off the holidays with not one, but two new Christmas brews for today’s New Beer Friday. 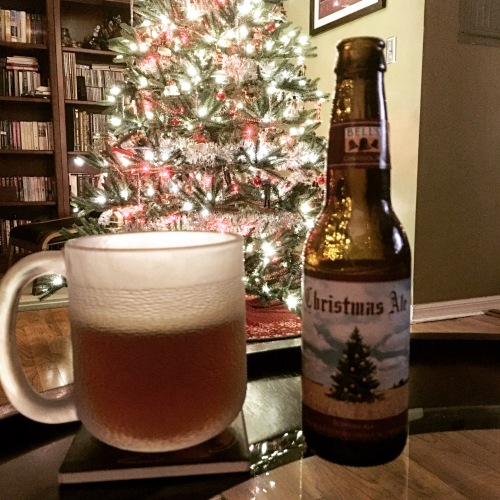 Bell’s Christmas Ale is a Scottish-style ale which is an unorthadox choice for a Christmas beer, but it’s well-served here. It pours a medium orange with about a finger of off-white head. There’s a solid fruit bouquet with a hint of caramel.

The first pull gives caramel notes with heavy malt and just a touch of nuttiness, specifically almonds. On the back end is an array of fruit flavors, most notably, white grape, dried cherries and candied figs with a little bit of a hoppy bite.

This is a surprisingly light and drinkable beer, almost session-like, which is uncharacteristic for a Scottish Ale. Perhaps that’s the holiday gift from Bell’s. 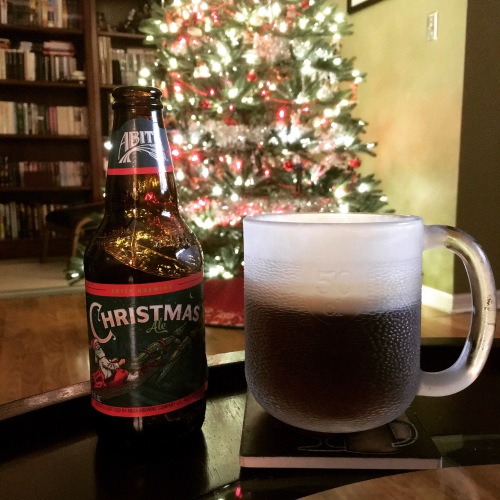 Two years ago I tried their 2014 Christmas Ale and was rather impressed with it. The 2016 keeps the standard high.

The 2016 Christmas Ale pours a very dark red with almost two fingers of frothy brownish-white head. On the nose is a very strong scent of pine.

The first pull is somewhat hoppy but with an immediate blast of the same pine. The pine rounds out on the back end to a surprising and pleasing peppermint flavor which, when combined with the pine, tastes almost reminiscent of a wintergreen Lifesaver. It sounds odd but it works and works well.

This is a unique brew and once again Abita makes an ale that screams Christmas.

It’s still early in the season so it should be relatively easy to get your hands on these but don’t wait because we all know these seasonal brews won’t last long.

Tried Bell’s or Abita’s Christmas Ales? Leave a message in the comments section!