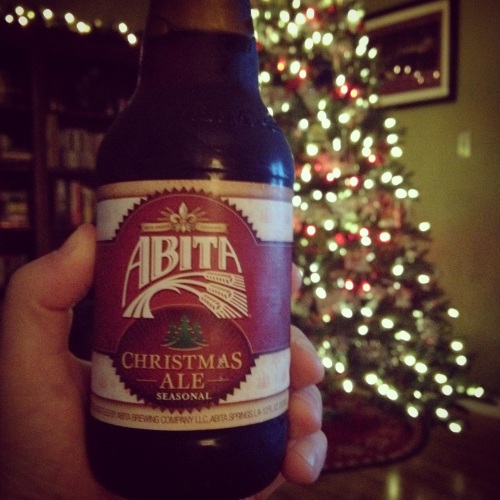 This entry was posted on December 13, 2014 by A.C. Noia. It was filed under Beer and was tagged with Abita, Christmas Ale, Christmas Beer, Christmas tree.

Okay seriously @sharisberries ? This is the second year in a row the dipped berries I sent my mom for Mother’s Day were delivered in this condition. Emails with the photos asking for a refund have been ignored. I’d say do better but at this point I just don’t intend to use you anymore. “Fool me twice” and all that. Which is a shame because she really liked them… #strawberries #chocolatecoveredstrawberries #tampafooddude #tampa_food_dude
Carbing down tonight in anticipation of some food freedom this weekend… Chipotle Chicken Stew w/ fresh Avocado, Cheddar and a little Greek Yogurt. One of my favorite stews! #chipotlepeppers #chickenstew #avocado #greekyogurt #stew #tampafooddude #tampa_food_dude
Fresh Mahi Mahi with some homemade Chimichurri… #fish #mahimahi #chimichurri #tampafooddude #tampa_food_dude
72 degrees and sunny! Taking advantage of what will probably the last sub-80 degree weekend until November with a flight at @bigstormbrewing… 1) Cherry Margarita Sour Ale 2) Cucumber Dill Sour Ale 3) Key Lime Wheat Ale 4) Wavemaker Amber Ale All four are badass but I’m really digging the Cherry Marg. Still one of my favorite breweries! #bigstormbrewing #beer #ale #amberale #sourale #tampafooddude #tampa_food_dude
Friday Night Fish & “Chips” - My girl cooked up some lightly breaded, pan-fried cod in just a little olive oil and then roasted a little purple and orange cauliflower medley. I air fried up some root veggie “chips” (red beetroot, carrots and parsnips) to go with the fish. Getting lots of colored veggies in this meal! #fishnchips #fishandchips #rootvegetables #fries #cauliflower #cod #airfryer #tampafooddude #tampa_food_dude
Happy National Beer Day! Playalinda Brewing’s Ginger and Elderberry Ale from the Tangerine Cafe: Flavors of the Medina Booth @ Epcot’s International Flower & Garden Festival. One of my favorite beers of the fest this year! #nationalbeerday #playalindabrewingco #beer #epcotflowerandgardenfestival #epcot #tampafooddude #tampa_food_dude