I’ve always dug Magic Hat and their #9 was one of the first ales that really taught me the difference between a beer and a microbrew. Their seasonal offerings are always unique and I look forward to trying them every year. I love their Hex Octoberfest and was especially impressed with this year’s winter G-Thang Gingerbread Ale, so I picked up their Pistil Dandelion Ale as soon as I saw it.

Pistil pours a rich golden color, heavily carbonated with a good two fingers of head that dissipates quickly. There’s a definite floral aroma with an underlying hints of wheat and just a little bit of pine.

Dandelion seems like an odd flavor to add to a brew but it works. It starts out rich and very grassy, with a little hint of lemon and pear. It doesn’t really mellow much but continues that bready grassiness through the pull. There’s a slightly bitter finish to it but that’s to be expected given it’s literally flavored with a weed.

Pistil is a decent seasonal offering and seems to really fit for this time of year. If you’re ready for winter to end it’s a good way to usher in the spring, so give it a shot.

Tried Magic Hat’s Pistil? Leave a message with your thoughts in the comments section!

I’m always on the lookout for new undiscovered hideaways and Seminole Heights seems to be very conducive for these types of establishments. So far it hasn’t disappointed me and the Mermaid Tavern has added another notch to its belt. Located just off of Sligh on Nebraska Avenue, the Mermaid’s outward appearance definitely belies something greater.

Let’s be honest here, when you think of Nebraska Avenue the first images that come to your mind are likely of prostitutes, crappy strip clubs and seedy motels. Indeed there’s one of the said motels right across the street from the Mermaid but if you can get past the location your tolerance will be rewarded.

Inside, the Mermaid is a polished gem; definitely a much more trendy establishment than you’d guess from the outside. There’s somewhat of a nautical theme throughout the place but slightly more eclectic. The tables and chairs are mismatched but somehow it all seems to work together. The lighting is dim enough to add some ambiance but still bright enough to see. A shelf full of board games lines the wall. A large blackboard hung by the bar showcases the evenings’ myriad of craft beer offerings.

While it doesn’t look like it would be, the Mermaid is a kind of half-service establishment. You get your own drinks at the bar and if you’d like to eat, you also order at the bar at which point they’ll give you a number to put on your table and bring out your food when its ready.

We started with beer as the menu listed quite a few brews I’d never even heard of and I spend a great deal of time at beer bars like the Brass Tap and World of Beer. I started with a Smuttynose Scotch Ale which I’d never tried before and which was surprisingly strong. After a beer or two we ordered from a menu which showcased a number of unique dishes; everyday pub-fare this was not.

We decided to start with a few appetizers and chose the Fried Pickles and the Black Truffle French Fries. Fried pickles have recently become more and more of a commonplace pub-food, but these were whole petite dills rather than pickle chips or spears and I think that helped cut down on the water which made them fry up a little more solidly. The breading was a beer batter that used a nice ale rather than just a standard macrobrew and the seasoning was spot-on.

The black truffle french fries were off the chain. Between the truffles, the shredded cheese and the garlic aioli, these things were a taste explosion. I’d recommend them to anyone who’s a first-timer at the Mermaid. 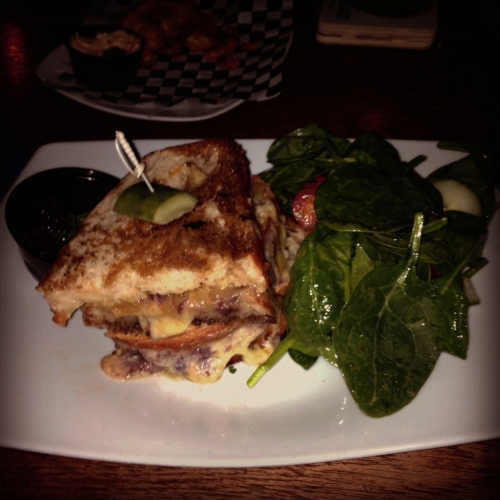 For my entree I had to try the Drunken Grilled Cheese. At some point you have to say a grilled cheese is just a grilled cheese, but the flavor and texture of this thing was like no cheese sandwich I’d ever had before. A triple-decker, this sandwich was made with four different kinds of cheeses, including a drunken cheese which uses alcohol in the cheesemaking process. The chef added some olive tapanade which gave it a savory flavor and served it with a blackberry chutney that rounded out the dish quite nicely. A spinach salad with a raspberry vinaigrette complimented it perfectly and made me feel slightly less guilty about the heart-attack-on-a-plate it was sitting next to. On the recommendation of the mustachioed bartender, I ordered a Crafted Artisan Pollinator (a blackberry mead) to go along with this and it was an insanely good pairing.

Portions sizes were right in line with the price which was very reasonable and I don’t have a single complaint about the food, the booze or the service. When dinner was over we settled in, talked, enjoyed some more drinks and people-watched.

On that note, the people who frequent the establishment seem to be from very diverse backgrounds and appear to genuinely enjoy the melting-pot vibe of the Mermaid. This may be par the course for Seminole Heights but it’s still good to see.

If you’re looking for an undiscovered hideaway with excellent food, a great craft beer menu and an all-around enjoyable atmosphere, give the Mermaid a go.

Tried the Mermaid Tavern? Leave a message in the comments section!