Last night I had plans to meet some friends down in South Tampa for drinks at their place in Hyde Park and then we were going to grab some dinner at a local restaurant. When they suggested Boca I was ecstatic as I’ve been looking forward to giving that place a try for quite a while now. I was not disappointed. 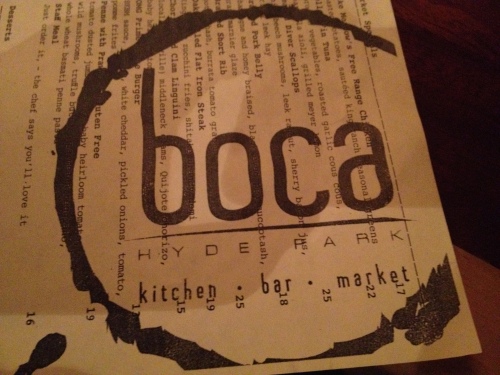 A couple of months ago, I reviewed the Refinery which is somewhat in the same vein as they both tout local ingredients. Indeed, when you enter Boca there is a wall-sized blackboard listing the local farms they are currently purchasing from. The main difference is that both establishments change their menus based on the ingredients they can obtain, but Refinery has a completely new menu every week and Boca does a partial rotation combined with certain fixed items.

Upon entering the establishment I noticed a distinct difference. Where the Refinery’s style is very hipster and trendy, Boca goes after more of a classy feel. They occupy the same place where the open-air BBQ joint, Smoke used to be. They did a really good job converting the building to a more upscale, enclosed area while still retaining some of the unique architecture. The clientele seems to be a little older and the staff slightly more serious. Not to imply anything negative about the Refinery, they’re just two separate ideas.

I chose to stick with the Samuel Adams Octoberfest, because I know the season is drawing to a close, but some of my friends tried some of their crafted cocktails. Some of the more eclectic libations were the Thai One On, (coconut, lemon grass, lime and gin), the Georgia on my Mind (grilled peach and honey with sour mash whiskey) and the Indian Summer (watermelon, apple shrub, basil and Bombay).

The menu was on the smaller side but very diverse, with apps, salads, signature flatbreads, main entrees and deserts. Every item appears to be a slight twist on a standard dish. 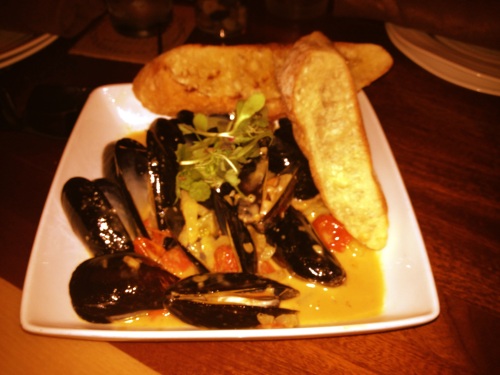 For an app, I tried the Fire Roasted Mussels with fresh herbs in a Sambucca and garlic reduction sauce. I’ve never seen anyone use Sambucca in a seafood dish before but the fennel/black licorice taste of the alcohol mixed with the mussels was a wonderfully unique melding of flavors. They served it with a couple hunks of crusty italian bread, which was perfect for sopping up the sauce. 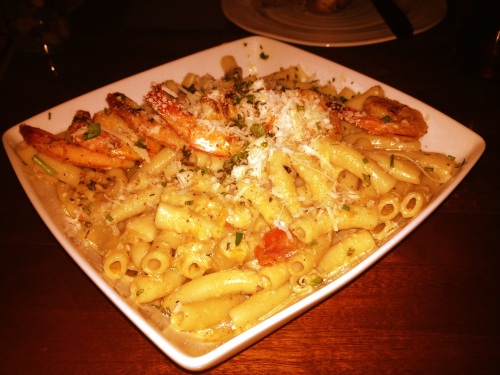 For my entree I chose the Penne & Prawns with wild mushrooms and baby heirloom tomatoes in a truffle butter and parmesan reggiano sauce. The penne was a whole wheat, organic and gluten-free variety of pasta and did a good job holding the incredibly rich sauce. The prawns were cooked in a blend of spices that almost made them taste like they were smoked.

Boca’s portion sizes were spot on. Some of my party finished their meals feeling full while others had leftovers to walk away with. I’m a stickler for portion sizes, especially when the menu is a little pricey; I’d rather order a dish and take home what I don’t finish than walk away still feeling hungry. Plus, I like to enjoy a few cocktails when I’m dining with friends or family and with a full stomach I can safely enjoy one or two without worrying about becoming inebriated. I chose to skip desert but there were a few items that caught my eye. Most notably, the local berry tartlet with vanilla bean ice cream and what appeared to be some kind of pistachio fritters with candied bacon.

The staff was friendly and professional. Our server was weeded to begin with and then they stuck him with our party of eight, yet he did an excellent job attending to us. I noticed the wait staff was in such synchronization that other servers helped him out if it looked like he was going to be fall behind. An attentive manager walked around ensuring guests were satisfied. In an interesting little twist, the checks were delivered on a cedar plank rather thank those vinyl bill folders which I thought was a nice touch.

Boca is a perfect place for dinner and drinks in an intimate, classy environment and I can’t recommend it enough. I spent the evening with a group of friends, some of whom I do not get to see as often as I would like. The amazing experience we had at Boca was a perfect end cap on a great night.

Eaten at Boca before or interested in trying it? Drop me a line in the comments section!

And remember as always… the food abides…

This entry was posted on October 21, 2012 by A.C. Noia. It was filed under Beer, Restaurants and was tagged with food, restaurants.