I tend to shy away from chain restaurants and their cookie-cutter menus but 100 Montaditos is an exception in almost every way possible. First, it’s a primarily European chain with only two other US locations, one in NYC and another in DC so it’s not exactly like a Chipotle. Second, their menu, is so huge you could eat there 1000 times and never get the same combination twice. Third, I’ve seen the menus for their other locations and there are definitely some variations. All of which, coupled with the incredible flavors of their food, garnered the need for a review…

Literally translating to “100 small sandwiches,” I probably wouldn’t have attempted to seek out 100 Montaditos on my own (and if it wasn’t for the fact that it opened up right next door to the Wiregrass Brass Tap that I frequent every other weekend I might not have ever tried it). When explaining it to others, the best description I can give is “Spanish Sliders.” I love choice when it comes to menus and this place serves it up in droves.

With a decidedly Spanish décor, 100 Montaditos is another type of half-service location where you order at a counter and they bring you your food. Because the selection is so large, they give you a paper menu and a pencil and you check off what you’d like (as if you were ordering sushi). With a number of different kinds of breads, sauces, meats/fishes, cheeses and toppings, the flavor combinations are outstanding. 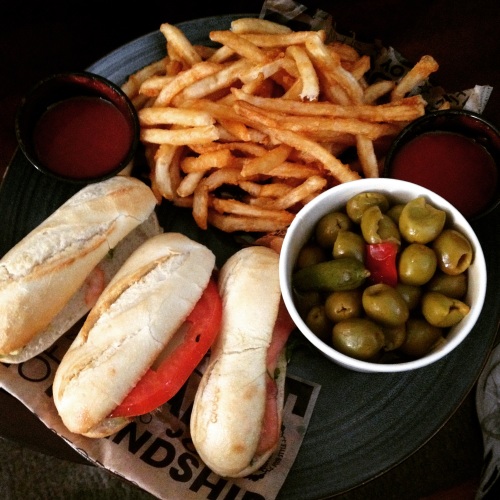 My first time there I tried the #15 (Baby Shrimp, Lettuce and Ali Oli), the #71 (Smoked Salmon, Cream Cheese and Arugula), and the #77 (Anchovies, Fresh Tomato, Mayo and Spanish pickles). On the side I just ordered some fries with their incredibly spicy Serrano Ketchup and a small bowl of their Spanish Olives.

You would think three tiny sandwiches wouldn’t be much, but once it’s on the plate it’s actually quite a lot of food. Everything was fresh, from the meat to the sauces to the bread. My favorite of the bunch was the # 77. The anchovies and the pepinillo pickles were extremely flavorful (and I don’t normally reach for mayo when I make a sandwich). 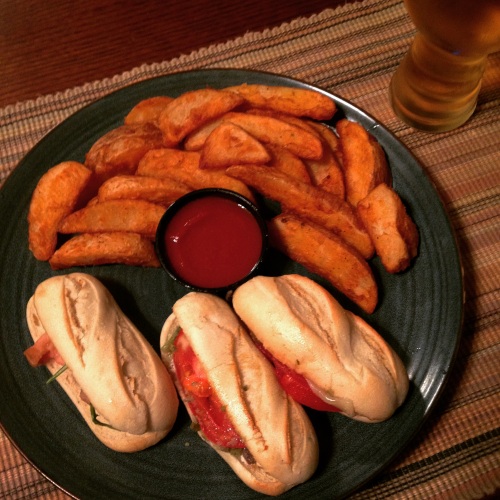 On my second shot, I tried the #25 (Tuna, Fresh Tomato, Arugula, Spanish Pickles and Ali Oli), the #66 (Manchego Cheese, Fresh Tomato, Green Pepper and Anchovies) and the #75 (Smoked Salmon, Blue Cheese, Arugula and Olive Oil). This time I tried the Bravas Potatoes instead of the fries and while I wanted to try to Ali Oli sauce as a side, the spice-o-holic in me couldn’t tear myself away from the Serrano Ketchup.

Again, nothing short of a flavor explosion. The #66 was my favorite in this bunch although the Tuna in the #25 held it’s own. The Bravas Potatoes were a little more robust than the fries and I will probably stick with those on future visits.

For those with a proclivity for red meat, there are plenty of options from traditional Spanish meats like Chorizo, Serrano Ham, Salchicho, Lomo and Christorra as well as more American fare like Philly Steak, Meatballs and BBQ Pulled Pork. If you’re looking for something other than a sandwich, they do have salads and a number of appetizers and small plates like Tortilla Espanola (a type of Spanish egg fritata), Crispy Calamares, and Croquetas.

If you want to have a drink, a selection of beer, wine and sangrias are available. While I was waiting, I did hear someone at the table next to me comment on how much they loved the sangria, so take from that what you will. 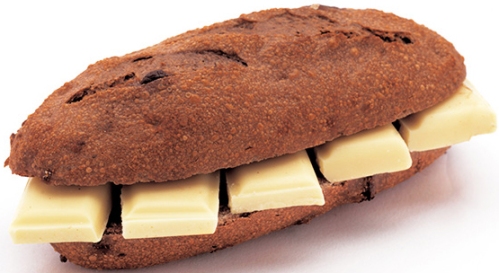 And while I don’t have much of a sweet tooth, their Chocolate Montaditos look kind of amazing. Chocolate bread with different combinations of fillings like Sweet Cream, Hazelnut Spread, Chocolate/White Chocolate, Spanish Almonds and Oreo Cookies look like they will win over desert lovers everywhere.

As you can probably tell from my above photos, I’ve preferred to take their food home rather than eat in-house and 100 Montaditos just might have become my Sunday night go-to, when I just don’t feel like cooking. Although at some point I’m pretty sure I will order takeout again, bring it the 10 steps next door to the Brass Tap and eat it there. Pairing this food with a spicy beer like 5 Rabbit’s 5 Vulture Oaxacan Dark Ale or Pair O’Dice’s Mexicali Jalapeno Lime Pale Ale would be nothing short of astounding.

Tried 100 Montaditos? Leave a message in the comments section!

Okay seriously @sharisberries ? This is the second year in a row the dipped berries I sent my mom for Mother’s Day were delivered in this condition. Emails with the photos asking for a refund have been ignored. I’d say do better but at this point I just don’t intend to use you anymore. “Fool me twice” and all that. Which is a shame because she really liked them… #strawberries #chocolatecoveredstrawberries #tampafooddude #tampa_food_dude
Carbing down tonight in anticipation of some food freedom this weekend… Chipotle Chicken Stew w/ fresh Avocado, Cheddar and a little Greek Yogurt. One of my favorite stews! #chipotlepeppers #chickenstew #avocado #greekyogurt #stew #tampafooddude #tampa_food_dude
Fresh Mahi Mahi with some homemade Chimichurri… #fish #mahimahi #chimichurri #tampafooddude #tampa_food_dude
72 degrees and sunny! Taking advantage of what will probably the last sub-80 degree weekend until November with a flight at @bigstormbrewing… 1) Cherry Margarita Sour Ale 2) Cucumber Dill Sour Ale 3) Key Lime Wheat Ale 4) Wavemaker Amber Ale All four are badass but I’m really digging the Cherry Marg. Still one of my favorite breweries! #bigstormbrewing #beer #ale #amberale #sourale #tampafooddude #tampa_food_dude
Friday Night Fish & “Chips” - My girl cooked up some lightly breaded, pan-fried cod in just a little olive oil and then roasted a little purple and orange cauliflower medley. I air fried up some root veggie “chips” (red beetroot, carrots and parsnips) to go with the fish. Getting lots of colored veggies in this meal! #fishnchips #fishandchips #rootvegetables #fries #cauliflower #cod #airfryer #tampafooddude #tampa_food_dude
Happy National Beer Day! Playalinda Brewing’s Ginger and Elderberry Ale from the Tangerine Cafe: Flavors of the Medina Booth @ Epcot’s International Flower & Garden Festival. One of my favorite beers of the fest this year! #nationalbeerday #playalindabrewingco #beer #epcotflowerandgardenfestival #epcot #tampafooddude #tampa_food_dude