Ma Nature managed to give us one last blast of the dry season (I know I said that last time but the weather continues to surprise) with a cold front that stretched all the way down to us in the Bay Area which very rare in May. Being smart enough not to waste it, our crew headed for the high seas to enjoy some boating and kick-ass weather. Of course the day included some great food and craft beers.

I brought along two six packs for the day. The first was Uinta Brewing’s Baba Black Lager. This brew had the flavor notes of a porter but it was no where near as thick. This boasted some malty notes, some toasted barley and just a hit of hoppiness. For a dark beer this was remarkably smooth and wound up being a perfect brew to enjoy out on the water. 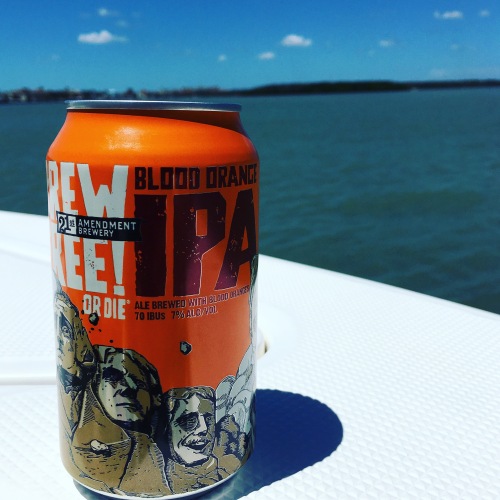 The second was 21st Amendment’s Brew Free! Or Die Blood Orange IPA. I absolutely loved this one. Of all the Blood Orange IPAs I’ve tried recently this was the sweetest. It honestly tasted like a hoppy, boozy Sunkist orange soda and this is a good thing.

The cooler air brought a lot of wind so we stuck to the inter-coastal waterway due to all the chop on the water. This afforded us the chance to hit the Seabreaze Island Grill and Raw Bar in Reddington Shores, probably one of the best dockside seafood eateries I’ve been to in quite a while. 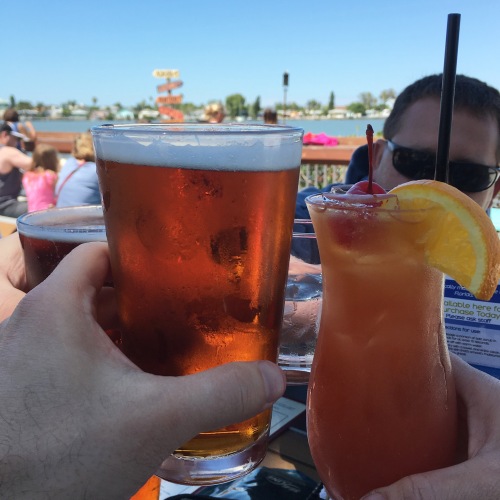 Started with a round of drinks and discovered a much appreciated policy of a free beer if you arrive by boat.

Ordered a plate of Caribbean Island Wings for the table. They were cooked in a flavorful but not overpowering jerk seasoning and served with two dipping sauces.

I’m a sucker for good shellfish so I went with the Island Style Mussels. This was hands-down the largest bowl of mussels I’ve ever eaten and the red sauce it was served in was a perfect complement.

We spent the rest of the day out on the water and then decided to hit the Candy Kitchen in Madeira Beach for some ice cream. 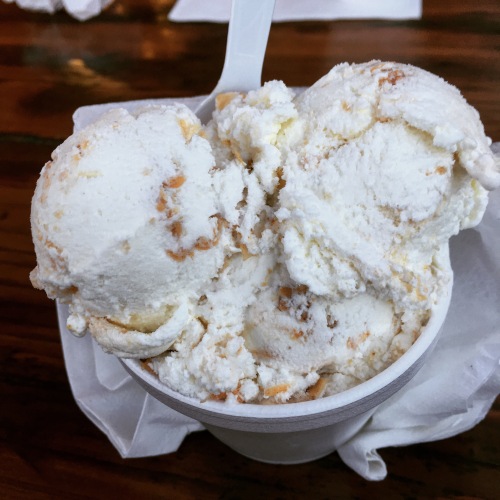 Not much of a sweet tooth but Ice Cream and Peanut Butter would definitely be considered my kryptonites so this Vanilla Peanut Butter Swirl was the one that got me. 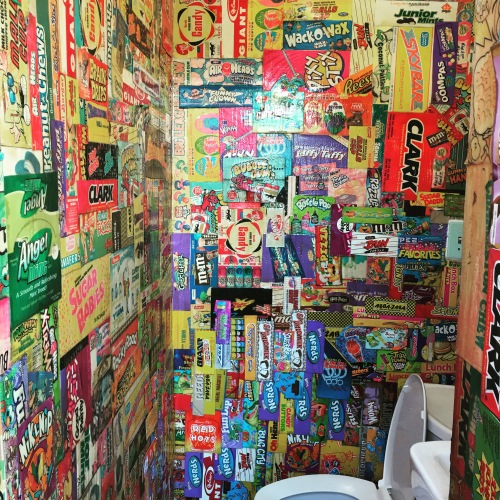 Being a vintage candy shop, the Candy Kitchen also boasts what is probably the most distracting bathroom you’re ever likely to see.

I always feel a little sad when the dry season ends because I know once the humidity kicks in I will be barricading myself indoors where it’s air-conditioned for the next four months (or longer if the weather the last few years has been any indication). With good food, good beer, amazing weather and some great friends, this weekend was a great way to send the season off in a positive way.

Have some favorite boating brews or dockside eats? Leave a message in the comments section!

One of my absolute favorite salads is sardines and avocado on romaine. Added some radishes, chick peas, black olives, muffaletta, shredded provolone cheese and the reserved oil from the sardine can. Can’t get enough of this stuff. #salad #sardines #avocado #radishes #provalone #muffaletta #tampafooddude #tampa_food_dude
Impossible Sausage & Kale Soup. Love the flavor in this… #impossiblemeat #impossiblesausage #kale #kalesoup #epcot #epcotflowerandgardenfestival #tampafooddude #tampa_food_dude
Okay seriously @sharisberries ? This is the second year in a row the dipped berries I sent my mom for Mother’s Day were delivered in this condition. Emails with the photos asking for a refund have been ignored. I’d say do better but at this point I just don’t intend to use you anymore. “Fool me twice” and all that. Which is a shame because she really liked them… #strawberries #chocolatecoveredstrawberries #tampafooddude #tampa_food_dude #sharetheberries
Carbing down tonight in anticipation of some food freedom this weekend… Chipotle Chicken Stew w/ fresh Avocado, Cheddar and a little Greek Yogurt. One of my favorite stews! #chipotlepeppers #chickenstew #avocado #greekyogurt #stew #tampafooddude #tampa_food_dude
Fresh Mahi Mahi with some homemade Chimichurri… #fish #mahimahi #chimichurri #tampafooddude #tampa_food_dude
72 degrees and sunny! Taking advantage of what will probably the last sub-80 degree weekend until November with a flight at @bigstormbrewing… 1) Cherry Margarita Sour Ale 2) Cucumber Dill Sour Ale 3) Key Lime Wheat Ale 4) Wavemaker Amber Ale All four are badass but I’m really digging the Cherry Marg. Still one of my favorite breweries! #bigstormbrewing #beer #ale #amberale #sourale #tampafooddude #tampa_food_dude