I’ve been out of commission for the majority of the summer with a foot injury but that hasn’t stopped my girlfriend and I from continuing to enjoy our epicurean adventures; we’ve just been spending more time close to home in order to limit my walking. It’s been nice because I’ve gotten to experience some new dishes, some old favorites and few new places I’d never tried before and I’ve managed to snap a photo of just about everything. Here are some highlights…

Roasted Brussel Sprouts w/Honey Sriracha Aioli from BJ’s Brewhouse – Of all the new restaurants going up in the new outlet area on SR56, I think I like BJ’s the best because of the beer selection and house brews and I don’t hold the fact that it is a chain against them. These sprouts are another good reason to stop in. The Honey Sriracha Aioli expertly toes the line between sweet and heat. 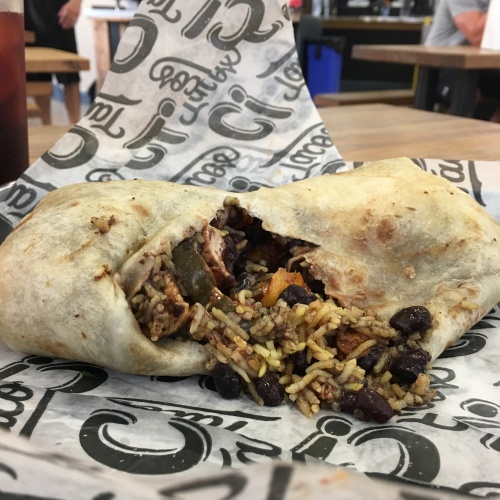 Gypsy Cab Burrito from Capital Tacos – Capital Tacos has one of the best burritos around in my opinion (second only to Taco Bus). The pickled jalapenos give the gypsy cab some really nice depth and quite a bit of fire if you like that kind of thing. 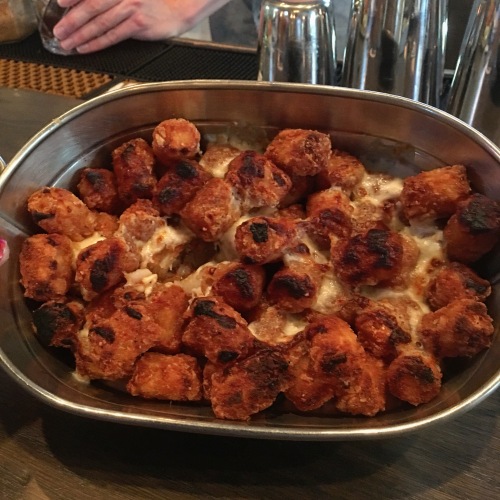 Loaded Tots at the Fat Rabbit – This was my first visit to the Fat Rabbit and I love having a non-chain pub like this in our immediate area. The wings were stellar and a great alternative to the local franchises like Hooters or Beef O’Brady’s, but the Loaded Tots stole the show. Crispy and smothered in warm cheese and gravy, these went down easy with a good beer.

Fire-Grilled Artichoke from Flamestone American Grill – Another first, I enjoyed Flamestone and found it to be a nice bridge between casual and upscale dining. Their menu impressed me to begin with but the inclusion of this Fire-Grilled Artichoke with a Kalamata Aioli ensures that I will return multiple times. I love a good artichoke and it’s difficult to find these on local menus.

Fried Gator Tail w/Jalapeno Cheddar Hush Puppies from Prime Bar – Located in the Shoppes @ Wiregrass, Prime Bar is another Wesley Chapel staple and they have an extensive enough menu for someone to try new things upon each visit. We decided to give the Fried Gator a shot for our appetizer and did not regret it. Not chewy or gamy which means it was prepared well and the Jalapeno Cheddar Hugh Puppies soaked up beer like a champ. 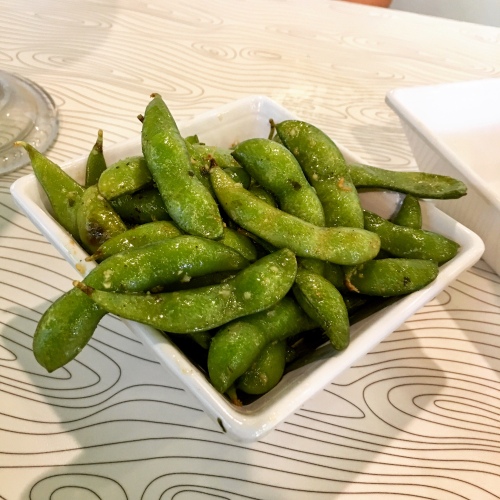 Garlic Lime Edamame from Ciccio Cali – You want great Edamame? Go to Ciccio Cali. Perfectly roasted and just the right amount of salt, they take an excellently prepared Edamame and kick it up a notch with the garlic and lime. We loved these and devoured the plate.

Thai Chicken Bowl from Ciccio Cali – Yet another dish from Ciccio Cali. I love a good Thai sauce and this Peanut Aioli was perfect. The mango and carrots rounded out the flavor of the dish well and the crispy fried wontons added a pleasing texture.

Blackened Cod Fish Tacos and Fried Plantains from Zim Zari California Coastal Grill – Another stellar selection from my special lady friend. She’s a woman after my own heart and if there are fish tacos on the menu, they have to be tried. These tacos from Zim Zari are probably the best in Trinity and the fried plantains were a great side dish.

Chicken Marsala from Noble Crust – Inaugural visit to Noble Crust finally gave me a chance to experience their style of Italian/Southern fusion which admittedly, I didn’t understand until I tried it. Their Chicken Marsala with Chicken Sausage, Four Cheese Grits and Roasted Mushrooms was absolutely decadent and I’ve never used that word to describe a non-dessert before. 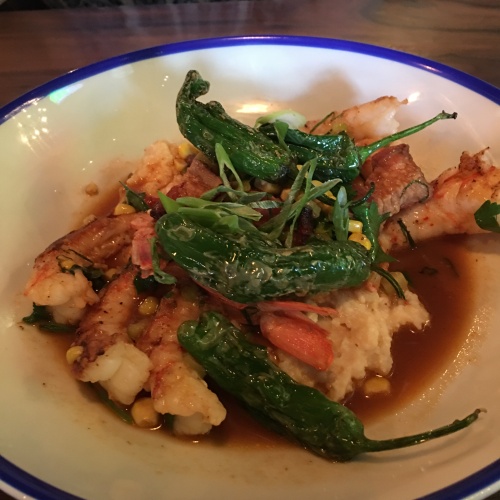 It’s funny how often you can ignore what’s in your own backyard while seeking greener pastures until something happens that forces you to open your eyes a bit. I am on the mend and will likely be striking out for farther locales again soon, but I intend to revisit some of these nearby places because they do warrant it. Consider this your reminder from the Food Dude to try and pay attention to what’s closer to home… You might be surprised by what you find.

Tried any of the above restaurants or have a suggestion for the New Tampa/Wesley Chapel/South Pasco area? Leave a message in the comments section!