As much as it gets a bad rap, social media can be a great thing in the world of food and beer…

Last Friday I got a photo in my Instagram feed of a cool looking liter mug and a message from Coppertail Brewing Co. to stop in the next day for their 2016 Oktoberfest Tapping event. They would be showcasing their new Oktoberfest and Tampa Dunkel brews and also have said mugs for sale. I asked how many of the mugs would be available and apparently they only ordered about 2 dozen of them so they’d go fast. Made it a point to get down there as early as I possibly could so I was in the door by about 1:30 and low and behold I was able to get my hands on one. 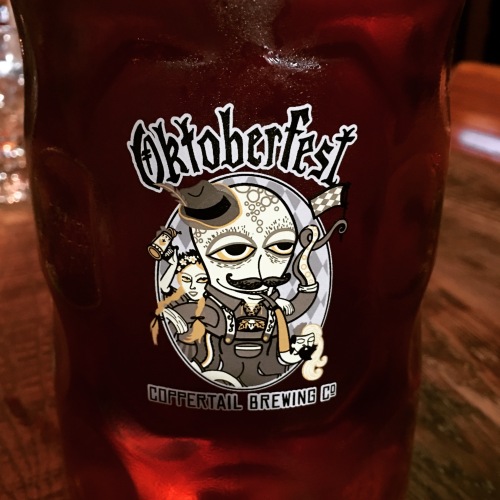 Coppertail has this unique bottle art that is a mix of avant garde and nautical themes and their Oktoberfest mug/bottle art is just as kitschy. How can you not find a droopy-eyed, mustachioed octopus in lederhosen cool?

Mug purchase included one free fill and discounts on subsequent fills all day and this year’s marzen was rather impressive to boot. Sweet and malty with just a slightly hoppy kick at the end. Well worth the trip, mug or not.

Tried Coppertail’s Oktoberfest? Leave a message in the comments!