With some remaining Abita Louisiana Spiced Ale left over from New Beer Friday I wanted to steer dinner towards something spicy that it would pair well with and I’ve been thinking of Jambalaya for a while now. 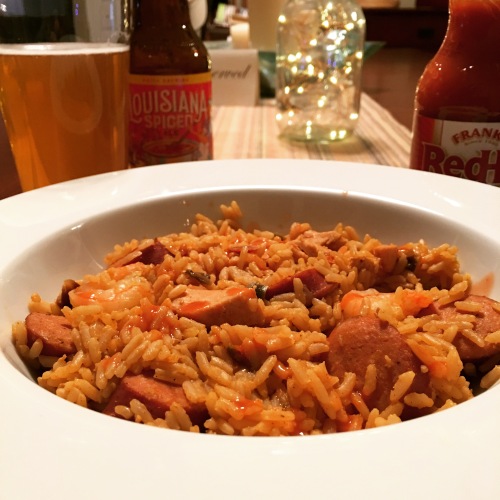 This Jambalaya is extremely simple. You just put everything in the pot and let it do its thing. And since I don’t eat red meat, the Andouille Chicken Sausage is a perfect substitute if you can find it. I have tried this in the past with uncooked chicken added at the beginning but I didn’t like the result because you had to cook it longer which dried everything out. Cooked chicken added at the end with the shrimp seems to work better and its still plenty of time for the flavors to meld.

Add oil, water, stock, sausage, parsley, bay leaf, cayenne pepper and rice into a large non-stick saucepan and stir well. Bring  mixture to a boil. Lower heat, cover and simmer 20 minutes or until rice is cooked and absorbs most of the liquid. Stir in shrimp and chicken and cook for another 5 minutes. Take off heat and let stand with the cover still on for another 5 minutes. Remove bay leaf. Season to taste with a little more cayenne pepper and some salt or a little bit of hot sauce (I’m a fan of Frank’s Red Hot).

It’s that easy folks. This is a very low maintenance recipe so it’s perfect if you’re entertaining. Next time I may try my hand at some seafood gumbo but this worked rather well with the beer, so I’d consider it a successful pairing.

Have a favorite Jambalaya or Cajun recipe? Leave a message in the comments section!

This entry was posted on May 1, 2016 by A.C. Noia. It was filed under Beer, Cullinary Experiments and was tagged with Abita Louisiana Spiced Ale, Andouille Chicken Sausage, Jambalaya.