Had some good friends over for a few drinks and that always means a table full of small bites to munch on. If there’s going to be a good deal of drinking involved, I always prefer smaller plates as opposed to a full dinner. Everyone can eat their fill and decide for themselves how much to eat and how much to drink. Since we did mainly apps, I experimented with some crostini and mini-toast dishes which my friends apparently dug.

The first was a Gorgonzola and Smoked Salmon with Fresh Dill Weed on Crostini. Popped these in the oven for about 5 minutes at 350, just long enough to melt the cheese and heat the salmon a little.

The second was Fig Jam and Goat Cheese with Chopped Pecans on Mini-Toasts. Left this one in the oven at the same temp but for about 10 minutes as the goat cheese took a little longer to melt.

Of course I have great friends who never show up empty-handed that contributed to the table full of food. 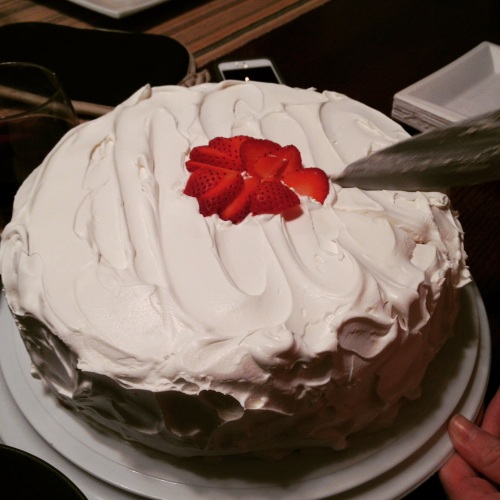 The highlight was probably my friend’s dessert which was a Twinkie Cake.

Yes, that’s a cake made out of layers of Twinkies and fresh strawberries. Tasted very similar to a strawberry shortcake. I haven’t eaten a Twinkie since I was a kid and I don’t really remember them tasting this good.

And last but not least, what’s a night of drinks without some good beer?

One of my friends mentioned that they liked this, so I picked some up. I haven’t had a Samuel Adams Cherry Wheat since college and it was as good as I remember if not better (which is saying a lot as I’m sure my palette has changed a great deal in the last 20 years).

A good night spent doing one of my favorite things to do: gathering around a table with good brews, great food and even greater company.

Have a favorite app or desert? Leave a message in the comments!

This entry was posted on April 19, 2015 by A.C. Noia. It was filed under Beer, Cullinary Experiments and was tagged with Samuel Adams Cherry Wheat.