Yes I’m quite aware this is about six weeks overdue, but with the holidays starting right after the end of the festival, this has literally been my first free weekend. Fear not though; the experience is still fresh in my mind. That’s the kind of impact Disney leaves. The chefs and event planners do a phenomenal job and I can’t stress enough how much this event is worth the cost, pricey though it may be.

So here’s a photo round-up of some of my favorite dishes and drinks gathered over three vists:

New Zealand – Steamed Green Lip Mussels with Garlic Butter and Toasted Bread Crumbs – The photo doesn’t quite show the scale, but these mussels were huge and packed with flavor. 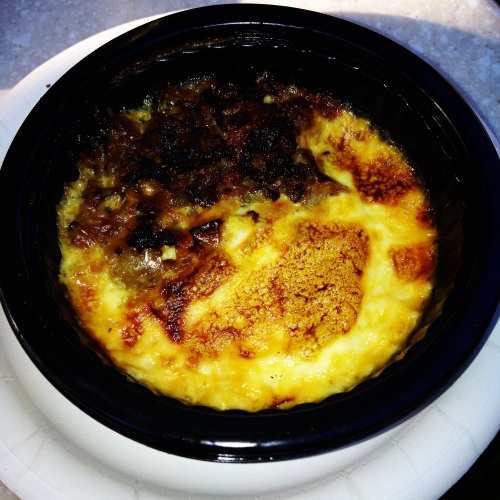 Africa – South African Bobotie (Egg Quiche) with Turkey and Mushrooms. An interesting combination of flavors and textures and not at all something I would expect food from Africa to taste like.

France – Gratin de Crozets de Savoie – A semolina wheat pasta gratin with mushrooms and Gruyère cheese. Paired with a Kronenbourg Blanc 1664 beer. The wheatiness of both made for an excellent pairing.

Hawai’i – Tuna Poke – Marinated tuna with seaweed salad and fried lotus root chips. – I’ve never had Tuna prepared like this before and the lotus chips were particularly unique. 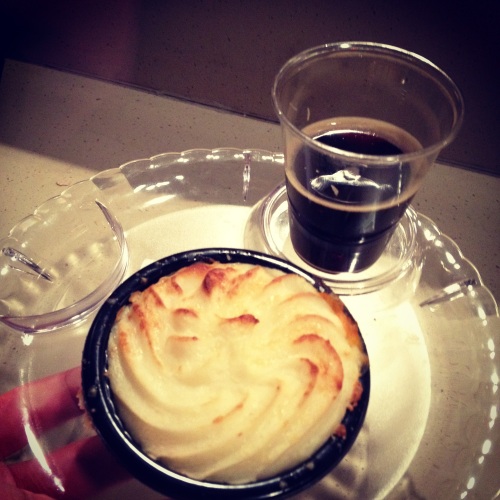 Scotland – Veggie Haggis with Neaps and Tatties – A spiced vegetable cake with rutabaga and mashed potatoes. Always wanted to try haggis, but the red meat prohibition stopped that from happening until now. Paired with an Innis & Gunn Oak Aged Beer.

Scotland – Potato Pancake – Also from Scotland, a potato pancake with Scottish smoked salmon and herb cream cheese. No recommended pairing but the Innis & Gunn worked quite well with this one too.

Brazil – Mosequa de Pescada – Fresh tilapia with a coconut lime sauce, hearts of palm and steamed rice. The hearts of palm were a particularly nice flavor enhancement. Not pictured, but I paired this with a Xingu Black Beer.

USA – Baked Lobster Alfredo – Another shot of the lobster mac & cheese. The Samuel Adams Octoberfest with it couldn’t have been a more perfect pairing. 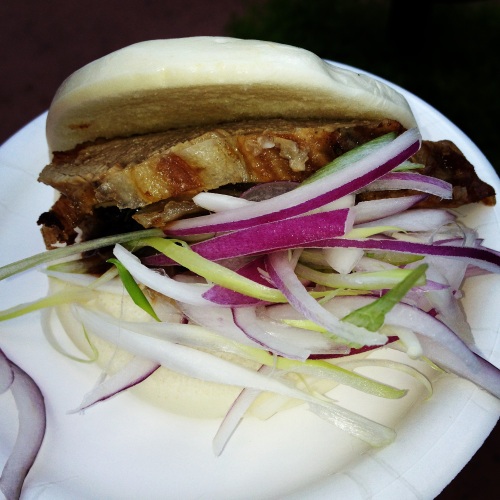 China – Beijing Roasted Duck – A roasted duck sandwich with red onions and lemongrass with a hoisin sauce on a steamed rice bun. This may very well have been my favorite dish of the entire event. The duck was tender, the hoisin sauce was savory and the steamed rice bun was like biting into a sweet cloud.

Bear in mind this is just a small sampling of some of my favorite dishes. I do not eat red meat but there were plenty of dishes for those who live on the bloody side of being a carnivore. Some of the more appetizing dishes included, Beef Empanadas from Patagonia, Grilled Lamb Chops with Mint Pesto and Potato Crunchies from Australia, Kielbasa and Potato Pierogies from Poland and an interesting Kimchi Dog with Spicy Mustard from South Korea.

And of course this is the International Food and WINE festival so there was plenty to drink. It’s no secret that Disney prepared for the global wine shortage long before it had an impact, hence the appearance of beers in just about every country in addition to the wine. As the craft beer movement has exploded over the last few years this was a good move and much appreciated by a xythophile like me.

Poland – Donausonne Blaufrankisch – Being a beer aficionado I stuck mostly to brews but this Hungarian “bull’s blood” style wine was amazing. 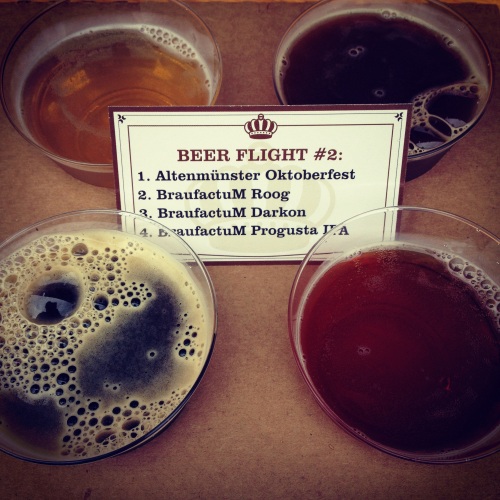 Germany – Beer Flight #2: Altenmunster Oktoberfest, and three beers from BraufactuM, the Roog, Darkon and Progusta IPA. There are two flight choices in the German Biergarten and I went with the darker of the two. The Roog was a smokey brown ale and was one of my favorites from the bunch. 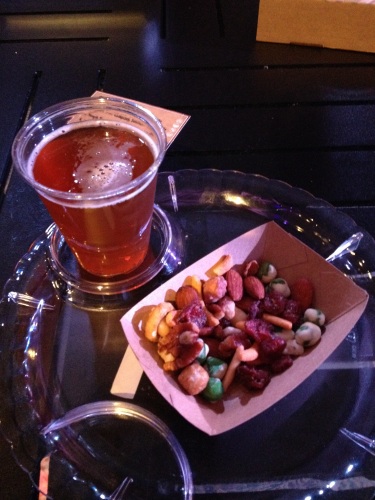 Craft Beer Building – Dogfish Head Punkin’ Ale –  They have an entire building dedicated to craft beers and since the festival takes place during my favorite beer season, I had to do at least one pumpkin ale.

Mexico – Blood Orange Margarita – Okay so technically this is not a Food & Wine festival item as it can be purchased all year-long at the Tequila shop inside the temple in Mexico. But this tart blood orange margarita with whipped cream and a cinnamon rim was so much like a desert I had to get one.

As you can see there’s a lot to taste at the Epcot International Food & Wine festival and there’s something for just about everyone. I recommend this to anyone who can swing the cost of it (Epcot Park Admission plus the cost of food and drink). It can get expensive but it’s worth it.

And speaking of worth it, you may also notice the plastic dish in most of the photos. They’re available for sale at a kiosk right as you’re walking into the World Showcase for about 4 bucks. I highly recommend picking one up as the thumb slot for stabilization and the drink holder that fits every beverage cup in the park makes it much easier to eat (and take photos if you’re THAT guy, like me 😉

Been to the Epcot International Food & Wine Festival? Leave a message in the comments!

This entry was posted on January 11, 2015 by A.C. Noia. It was filed under Beer, Restaurants, Wine and was tagged with event planners, Gruyère cheese, Lobster Alfredo, red meat, Scotland, steamed rice.