Part 1 generated a lot of buzz so I know you’re all waiting with bated breath. Well wait no more! We’re on to Part 2 of the Great Pumpkin Beer Round-Up! 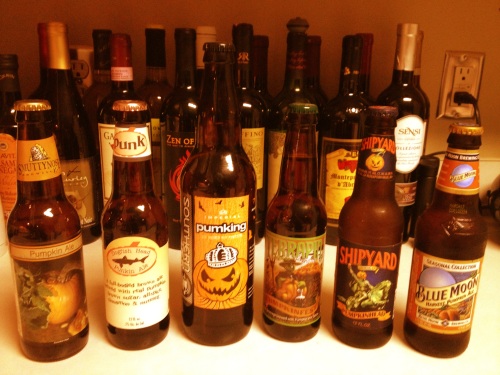 – Smuttynose Pumpkin Ale – Pours a light orange color. Gives off an unusually flowery bouquet. Smuttynose’s pumpkin offering is another one of those that comes off more like an IPA and less as a Pumpkin Ale.  It’s very crisp but it tastes more like something you’d drink during the summer with just a hint of and spice added rather than something brewed from the ground up to showcase those flavors. Not a bad beer at all but it doesn’t scream “autumn” to me like a pumpkin beer should.

– Southern Tier’s Imperial Pumking – Pours a bright orange color. The bouquet this gives off is reminiscent of sweet baked goods; you actually get a whiff of cookies and pies as you smell this beer. Southern Tier always does a great job with their seasonal offerings and Pumking is no exception. I’ve had this both on draft and in bottle and they both set a very high bar. Every aspect of the pumpkin pie flavor is here. There are notes of vanilla, cinnamon, nutmeg and clove on the first pull which mellow into a buttery graham cracker flavor (like a pie crust!), before a final creamy pumpkin finish.

–Terrapin’s Pumpkinfest – Pours a cloudy amber-red color. Terrapin’s Pumpkinfest is somewhat unique in that it comes across as a hybrid of a marzen and a pumpkin ale. This could be dangerous but Terrapin pulls it off rather well. There’s a sweet and smokey caramel flavor characteristic of an Oktoberfest brew on one side and the pumpkin and spice notes of a pumpkin ale on the other side. The flavors are preciscely balanced and compliment each other perfectly. If you also like marzens or you’re looking for something a little different in your fall beer, this would be a great pumpkin offering to start with.

– Shipyard’s Pumpkinhead Ale – Pours a golden-yellow. I know I prefer my pumpkin beers darker and thicker but for one on the lighter side of the spectrum, this one isn’t too bad. Apparently Shipyard has some consistency issues with this particular brew as I’ve talked to folks who barely tasted any pumpkin at all. However the bottle I poured was very heavy on the pumpkin. There are underlying notes of cinnamon with a little bit of nutmeg and it eventually mellows into a grassy flavor typical of a lighter ale.

– Blue Moon’s Harvest Pumpkin Ale – Pours a perfect reddish-orange color. Gives off a very spicy bouquet. For a brewery whose standard ale I dislike so much, Blue Moon continues to do a much better job with their seasonal offerings. They continue to tinker with their recipe and every year this pumpkin offering gets better and better. Blue Moon always works with a lot of wheat and which gives a very pie crust-like flavor on the initial pull which then rounds out to present the pumpkin and spice notes that remain strong through to the finish.

So who came out on top for Round 2?

I’m going to call this one a tie. The Blue Moon Harverst Pumpkin with its bready start and the Southern Tier Imperial Pumking with its creamy finish, both nail the pumpkin pie in a bottle flavor, albeit in slightly different ways. I have to give this one to them. Either of these offerings are perfect for sitting outside on a cool autumn evening and taking in the sights and smells of the season.

Honorable mention goes to the Terrapin Pumpkinfest. While not quite unique enough to bring it to the top like the Tommyknocker Small Patch Pumpkin did last week, it’s still a rather creative twist that was executed rather well.

I’ve still got quite a few more pumpkin beers to sample so stay tuned for round 3!

Tried any of this week’s pumpkin beers? Leave your thoughts in the comments section!

And remember… the food abides.

This entry was posted on October 27, 2013 by A.C. Noia. It was filed under Beer and was tagged with Blue Moon, Dogfish Head, pumpkin ale, shipyard, Smuttynose, Southern Tier, Terrapin.