Have you ever heard the phrase undiscovered hideaway? Whoever coined it could easily have been describing the Stein & Vine and they wouldn’t have been that far off the mark. 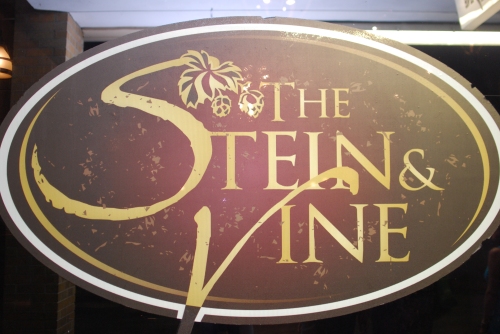 My introduction to the Stein & Vine was for a friend’s recent birthday. They had been there once before and loved it so it was their location of choice for the festivities. They really built it up so I’ll admit that my expectations were kind of high, but it totally delivered.

Off of King’s Highway in Brandon, tucked in between a gun shop and a dollar store with only a simple red neon sign that says “PUB” visible from the road, you’d never know that the Stein & Vine was there if you weren’t told about it beforehand. However the humble and unassuming location belies an amazing establishment once you walk through the doors.

The Stein & Vine is decked out in brick, hardwood and industrial fixtures, with a large granite bar as the focal point of the establishment accented with Bavarian steins and rare wine bottles. Two large chalkboards tower over a decorative fireplace and advertise the evening’s current selections. 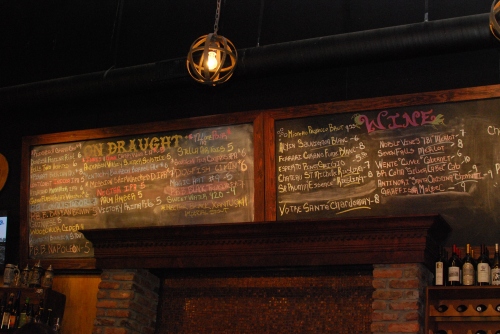 As the name suggests, the Stein & Vine features a wide selection of draft beers and rarer wines, many of which are in a constant rotation. I happened to visit again two weeks later and only about half of the same beers were still there on the second visit, the rest being replaced by newer selections. As someone who loves trying new beers and wines, this is something that will keep me coming back again and again. 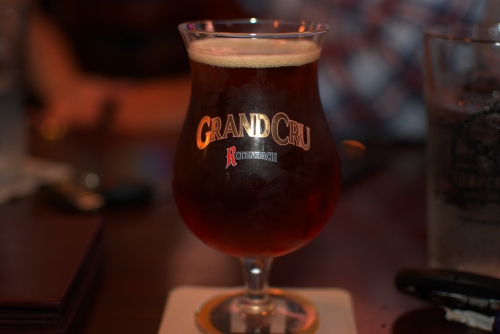 Tried a Green Flash Palate Wrecker and loved it. This was a deep brown ale with a nice bite to it and it went really well with the drunken shrimp we ordered as an appetizer.

Speaking of food, the menu, while on the smaller side is rather impressive. They could have easily done standard pub food that could just be thrown in a fryer, but the owners made a wise decision to go with some really unique and tasty choices.

Pig Wings (fried pork ribs with served with a number of different sauces), Drunken Shrimp (cooked in Curious Traveler Shandy or fried in a batter with Cigar City’s Maduro Brown Ale) and a Spicy Buffalo Chicken Philly Cheesesteak are some if the items you’ll find on the menu. Additionally, they will sometimes create special dishes for certain events. During July’s New Belgium Brewery Welcome Party, they offered a Meatloaf Sandwich that was marinated in Fat Tire Amber Ale. I do not eat red meat, but the sight of that dish nearly drove me to break a twelve-year moratorium on beef. 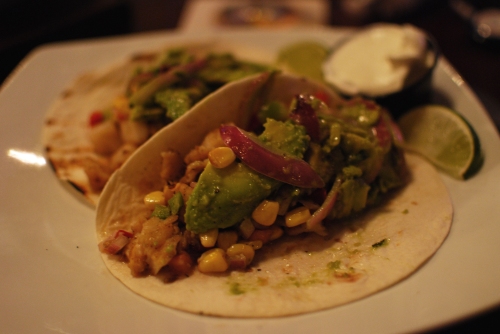 I went with the Baja Fish Tacos. As I’ve mentioned before, fish tacos are my hamburgers and I’ve got to try them everywhere I go. Served with Roasted Corn Salsa and an Avocado Salad these were just about as good as a fish taco can get and again, it’s something you wouldn’t expect here; every member of our party absolutely loved the food.

It’s important to note, that as small as this establishment is, they still took a reservation for 8 people on a Saturday night. This was a very good thing as I noticed it started to fill up pretty quickly as we headed farther into the dinnertime hour. If you’ve got a larger group, I’d recommend giving them a quick call.

After dinner we retired to a little area in the back with a couple of dart boards and some hightops where we were able to just relax, have some drinks and throw some darts in peace. Great night, great birthday fiesta for my friend and a great establishment. If you’re in the Brandon area or you’re just looking for an undiscovered hideaway to brag about, give the Stein & Vine a shot.

Tried the Stein & Vine? Leave your thoughts in the comments!

This entry was posted on August 24, 2013 by A.C. Noia. It was filed under Beer, Restaurants, Wine and was tagged with draft beers, rare wine, Stein & Vine.