Cooper’s Hawk Winery and Restaurant recently opened a Tampa location within a relatively close proximity to my office (yes the Food Dude has a day-job) and a co-worker gave it a shot and really liked it. A couple of weeks later another friend of mine was talking about it and she was absolutely raving.  This had me more than a little curious. A quick internet search yielded a whole lot of people echoing the same sentiment so I resolved to give it a try.

After paying them a visit with a couple of buddies, I can happily report that it’s everything it’s been hyped up to be and more. If there’s a phrase that applies to Cooper’s Hawk, it would dining experience.

I love it when a culinary experience is about more than just food. It’s a rare thing when ambiance, character, flavors and personality all come to to provide a level of immersion that you don’t find very often.

Being both a restaurant and a winery, Cooper’s Hawk includes a shop and tasting room. The shop sells various wine accessories and of course you can purchase bottles of their wine. My friends and I decided to show up about 45 minutes before our reservation to do a tasting. Tasters are given multiple options for a tasting; whites, reds, a mix of both, desert wines and seasonal samples comprised of some of their limited offerings.

We went with the mixed sampler composed of both reds and whites. There wasn’t a bad wine in the bunch. Our server was knowledgable both about the history of the winery as well as the wines she was serving us. She also allowed us to substitute a Sangiovese for an Orange Muscat that none of us were interested in and it turned out to be my favorite of all the reds. I never once felt like it was just a gimmick to get you to buy their wine.

Our table wound up being ready shortly before our tasting was done but we were told we could come back after our meal to finish up, another great service move.  I would still recommend showing up at least an hour ahead of time if you would like to do a tasting in order to get the most out of it and not be rushed.

The restaurant itself is casual but the design is so contemporary it has an almost an upscale air to it. Our server knew her stuff and was quick to explain the menu concept. Each dish is prepared by the chef to work with a particular wine, with certain specials coinciding with seasonal vintages. Each dish has an associated Bin number which is the pairing suggestion they recommend.

There are also wine specials. On the server’s recommendation we all decided to try the Vintner’s Blend which was a red table wine made from five noble grapes. Once again adding to both the value and the experience, she brought us each a sample so we could taste it before committing to a full glass. Hands down one of the best glasses of red that I’ve had in a long time. 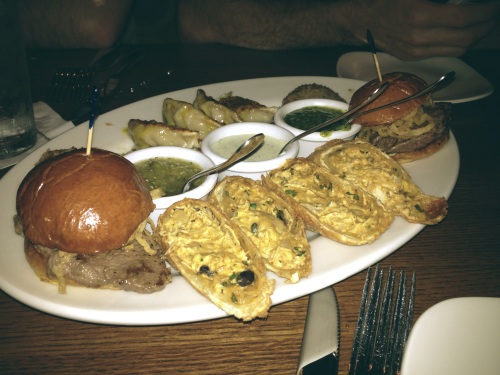 For an appetizer we decided to try their sampler platter which included their Over the Border Egg Rolls, Tenderloin Sliders, Chicken Potstickers and Mini Crab Cakes. Far from your standard greasy pub food, the flavors went perfectly with the Vintner’s Blend.  The potstickers, crab cakes and eggrolls were excellent and although I don’t eat red meat, my compatriots stated the sliders were phenomenal.

For dinner I decided to try the Roasted Eggplant Ravioli. This was a ravioli stuffed with eggplant, squash, zucchini, red onion and mozzarella and it was served with artichokes, kalamata olives and goat cheese in a San Marzano tomato sauce. Perfectly executed, this was a really flavorful dish and my iPhone photos do not do it justice. The tomato sauce was light and not acidic at all and the goat cheese gave it a creamy balance.

This dish was paired with their Lux Pinot Noir that had a slightly spicy finish to it and it could not have complimented the meal better. When they say they build the menu around perfect pairings they’re NOT kidding.

Portion sizes were spot on which was something I was worried about before the food came because one of the first things I noticed about the menu was how reasonably priced it was. I fully understand that the booze is what they’re making their money on but oneophiles know what kind of pricing to expect when drinking wine. The fact that they offset that by making their food prices as reasonable as possible is a great business plan. So if you’re not a wine drinker, Cooper’s Hawk is some incredible food at a great price.

After the disappointing visit to the Cigar City Brewpub, a similar concept that was executed very poorly, I couldn’t have been more pleased with my first  visit to Cooper’s Hawk and intend to return multiple times with more wine-swilling friends in tow. If you like wine or contemporary american cuisine, give them a try some weekend. If you like both, give them a try NEXT weekend.

Tried Cooper’s Hawk? What did you think? Leave a message in the comments!

This entry was posted on May 13, 2013 by A.C. Noia. It was filed under Restaurants, Wine and was tagged with food, food dude, restaurants.