One of my best friends is a fellow zythophile and I was asked to work more posts about beer into my rotation. Since Friday Happy Hour usually affords me the opportunity to try a new brew, I’ll try to post some beer opinions more often. For now let’s start with Red Brick Brewing Company’s Laughing Skull Amber Ale: 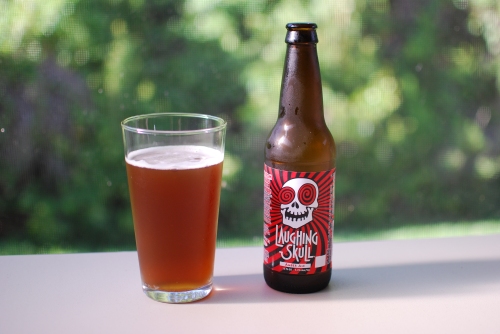 I’m a big fan of amber ales. I tend to gravitate towards the darker, spicier brews that are usually prevalent during the Fall and Winter seasons but since they all but disappear just after January 1st, I’m left spending the other 8 months of the year searching for a darker beer with a good flavor.

Laughing Skull by Atlanta’s Red Brick Brewing Company is a good addition to the springtime lineup. It has a hearty bread aroma which carries over to a hearty bread flavor. It’s malty and slightly sweet with little hints of citrus. There’s a slightly hoppy note upon the first sip which mellows afterwards into a nice grassy undertone. The flavors strike me as simple rather than complex which in this case is a good thing.

As evidenced in the photo above, it pours a rich red with a white head that unfortunately dissipated before I could get my camera out.

Laughing Skull gets a thumbs-up in my book.

Tried Laughing Skull? Have another beer you’d like me to try? Leave a message in the comments!

This entry was posted on April 19, 2013 by A.C. Noia. It was filed under Beer and was tagged with amber ales, laughing skull.