Rather than wallow in the fact that the Fall and Winter Beer seasons are over and slowly rationing out my dwindling stock of Marzens, Harvest Wheats and Pumpkin and Winter Ales I’ve given myself the task of trying more of what the other seasons have to offer with an open mind. For today’s New Beer Friday, I’m starting with the Wavemaker Amber Ale made by the boys over at Big storm Brewery right here in the Bay Area. 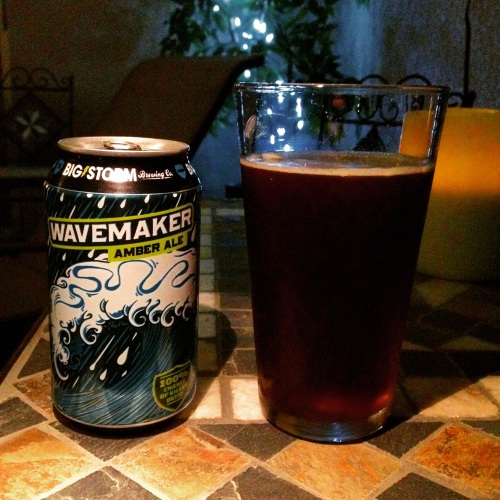 The Wavemaker pours a deep red with about half an inch of head (which unfortunately dissipated while I was trying to get the lights out on my lanai to turn on). There’s a significant toasty aroma which is rather pleasing.

The first pull brings a slightly sweet caramel and malt flavoring complimented by a very mellow citrus note with just the tiniest bit of spice. There’s a little bit of a bitter bite on the back end but it rounds out rather quickly. This is an expertly balanced amber ale; as dark as this beer is, it’s still remarkably light. This is the kind of beer I could drink outside on a hot summer day.

I’m digging the Wavemaker. It’s a very solid amber offering and enough of a kick in the pants to make me want to get my ass down to Big Storm’s tasting room over in Odessa, especially if I can get this stuff on draft.

Tried the Wavemaker Amber or any of Big Storm’s other brews? Leave a message in the comments section!