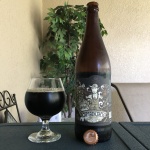 I really dig when a brewery experiments and I’ll never pass up the chance to try a unique beer. When I heard that Coppertail was brewing a stout with 300 lbs. of Stone Crab claws tossed into the wort, I made a point of stopping in and picking up a couple bottles. So for today’s New Beer Friday, I present Captain Jack’s Stone Crab Stout.

Captain Jack’s pours the richest and darkest of browns with about a finger of foamy beige head (which unfortunately dissipated before I could get a good photo) and significant lacing on the glass. On the nose is a bit of mocha, a bit more roasted grains and just a hint of brine.

On the first pull are solid chocolate notes with some more roasted grains. Those carry through to combine with just a little bit of toasted biscuit before you get to the crab flavors on the back end. Mouthfeel is creamy and really coats your tongue. This tastes like a beer you’d want to enjoy on a waterfront and I’m surprised to be saying that about a stout.

I love this brew and probably could have downed the whole 750ml bottle in one go if I wasn’t being careful. Some people may be put off by the concept of beer and shellfish, but if you’re anything like me (i.e, you wholeheartedly believe oysters and a good lager are the food of the gods), you’ll have no complaints.

Even if you do, as long as you’re not allergic to shellfish, give this one a try anyway. It’s a solid stout that doesn’t sit at the bottom of your stomach like a rock, the crab is not overpowering in the least and the flavors mix in a really interesting way.